53. A Flying Visit To Bordeaux

My final stop-over in France is Bordeaux - not to sample the famous wines - but rather to sample its history. The city is just an hour up the freeway from Arcachon where I have been visiting my friends Gerry and Yo, who kindly drove me in the rain to my destination. 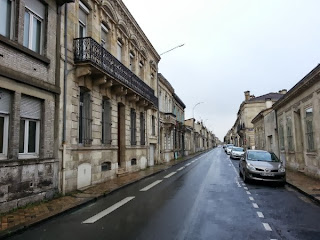 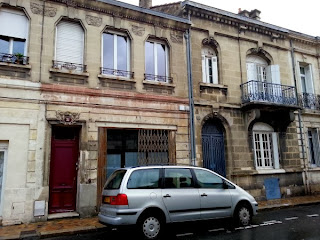 My home for the next 3 days - upstairs with one shutter drawn
Bordeaux's history dates back to 300BC when it was a settlement of the Celtic tribe the Bituriges. It fell under Roman rule in 60BC where it remained an important area for the commerce of tin and lead for about 300 years. Then over the next 400 years it's importance and its "ownership" varied according to its occupiers, until the 12th century when it came under English rule for the next 300 years, and then the French came along and after a battle with the English - which they won - annexed the region as part of the French Empire.

During that time the region established itself as an important wine growing area. Also at this time, building commenced on the magnificent Cathedral Saint Andre de Bordeaux. 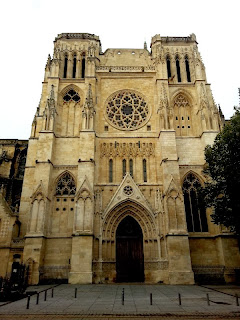 In this church in 1137 the 13-year-old Eleanor of Aquitaine married the future Louis VII, a few months before she became Queen. I seems child brides were also accepted by the Roman Catholic church in those times - especially when their marriages were planned by, and benefitted the state. 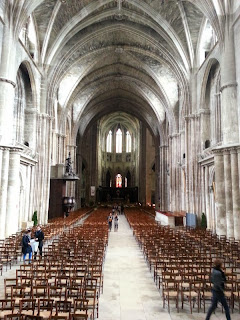 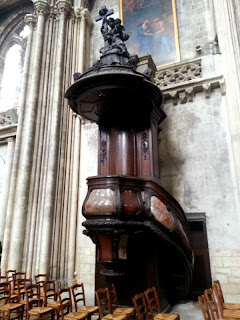 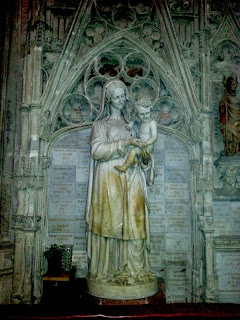 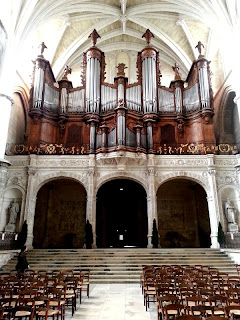 In the years following, Bordeaux also gained importance as a trading centre for slave and sugar from the West Indies as well continuing to be a major wine growing region. 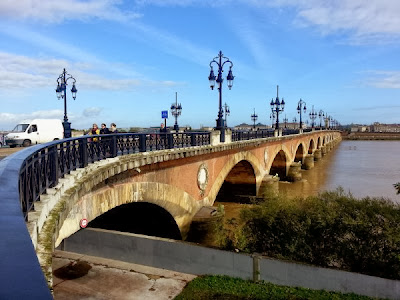 Pont de Pierre crosses le Garonne  The 18th century was the golden age for Bordeaux. Many downtown buildings (about 5,000), including those on the quays, are from this period. Victor Hugo found the town so beautiful he once said: "take Versailles, add Antwerp, and you have Bordeaux", and Baron Haussmann, a long-time prefect of Bordeaux, used Bordeaux's 18th-century big-scale rebuilding as a model when he was asked by Emperor Napoleon III to transform a then still quasi-medieval Paris into a "modern" capital that would make France proud. 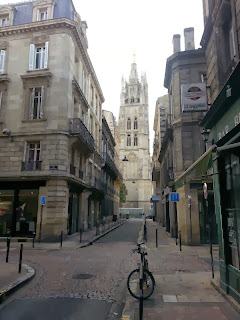 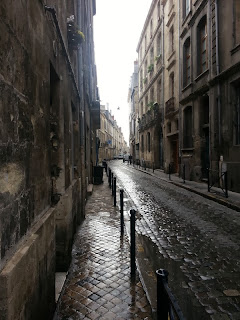 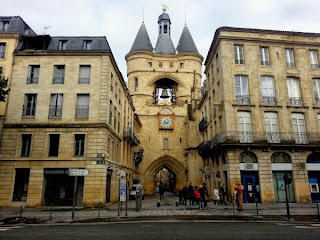 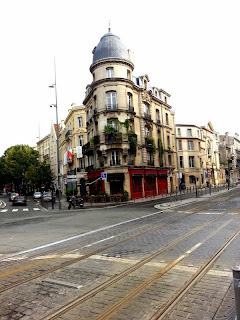 The city boasts a very up-market tram and buses network. The trams are the ultimate in French chic, are not expensive to ride and glide through the old city out into the more recent added suburbs. I spent a very interesting half day site-seeing in the rain - sitting in the comfort of these trams ... 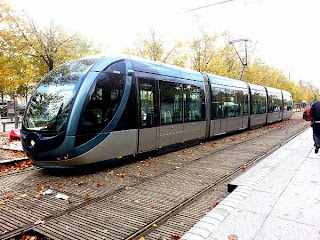 One of many beautiful monuments throughout the city is the impressive Monument aux Girondins, erected between 1894 and 1902 in memory of the Girondists – a political faction within the Legislative Assembly - who fell victim and ultimately to mass execution of the reign of Terror during the French Revolution. 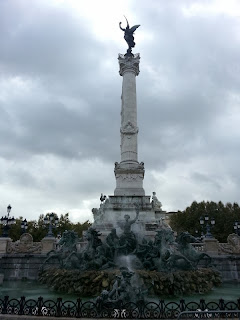 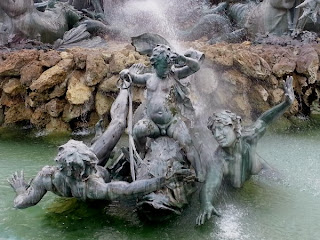 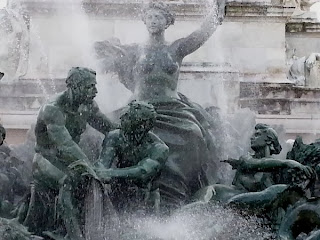 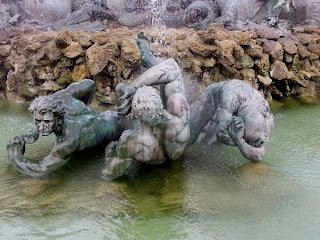 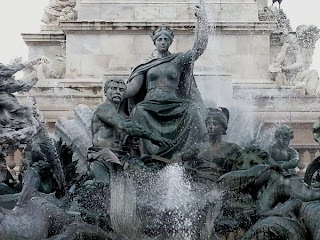 Bordeaux boasts a staggering 362 historical sites, and another highlight of my visit was a brief walk-through the Grand Théâtre de Bordeaux. The grand building was conceived as a temple of the Arts and Light and was built during the 1780s. Today it is home to the Opera National de Bordeaux as well as the Ballet National de Bordeaux. 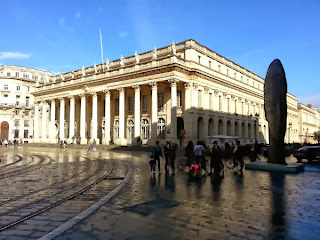 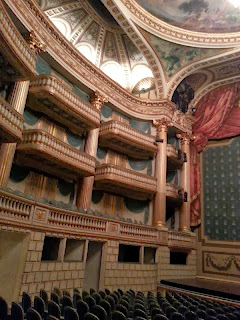 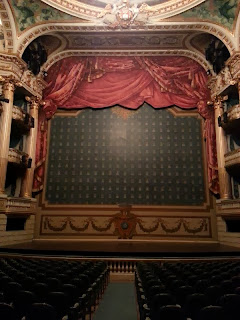 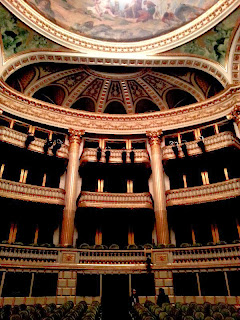 Unfortunately there were no productions happening during my stay in the city. 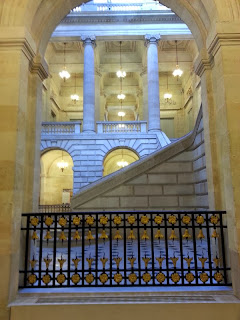 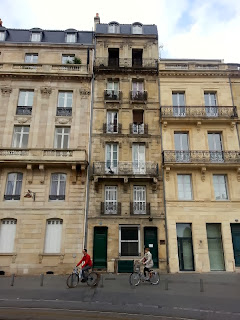 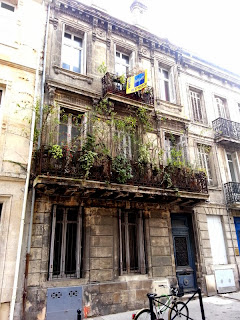 A renovator's dream - or nightmare ... 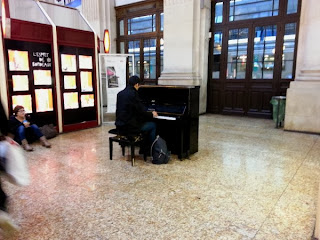 The city even provides a tuned upright piano for waiting commuters at the main railway station. This young back-packer entertained passers by with a very professional selection of the classics ... There was month's worth of sites for me to see in Bordeaux, but, hampered by rain and only a short stay I missed out on a lot - however one exciting gallery I did get to was the Musée d'Art Contemporain, and I'll show you that next ...