My purpose in visiting Fishbourne Roman Palace was, of course, to see the mosaics. It is one thing to view mosaics in a museum hanging vertically on a wall, completely out of context (like at the British Museum, for example). But seeing the mosaics in situ,the way they were originally laid out, is a whole other experience. 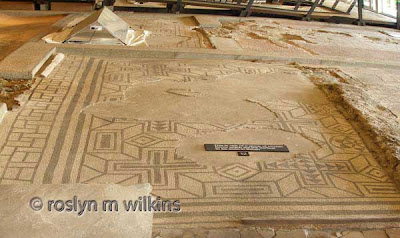 Mosaic with 3D effect.
At right is where a wall was constructed to divide the room into two.Obviously, unless somebody perfects time travel (and I wish that somebody would hurry up) we will never be able to view these ancient mosaics the way they were intended to be seen, with all the trappings. 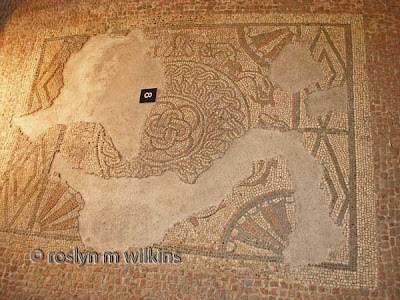 Solomon's Knot surrounded by dolphins and wine vases from early 3rd C.
For starters, except for the foundations, all the walls are missing at Fishbourne (as they are at most sites where ancient mosaics are found) which means we don’t see the frescoes that would have surrounded each room. Not to mention the furniture, sculptures and textiles. And the decorated columns.

In the case of Fishbourne, the building disappeared piece by piece and mysteriously showed up as parts of newer construction in the town. Conservation was not a big issue in previous eras, but reuse of materials certainly was. Also, there was a disastrous fire sometime between 270 to 280. And over the centuries, the rooms in the building changed their usage until the whole thing was forgotten and buried under several feet of dirt and grass. 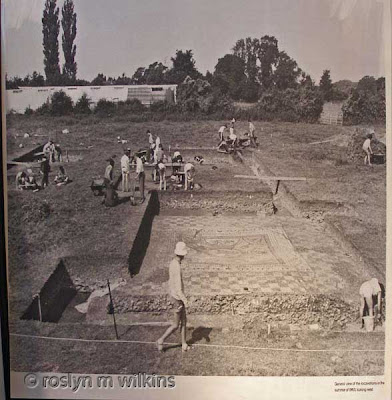 Excavation of the Palace in the 1960s.
It was discovered when a water-main trench was being dug.What visitors can see today is the north wing which is sheltered by a covered building. (The west wing contains five mosaics which were reburied for their protection.) There is a walkway running the length of the building between the mosaic areas. This is the closest we can get to viewing the mosaics without actually walking on them which, of course, the inhabitants of the Palace would have done. 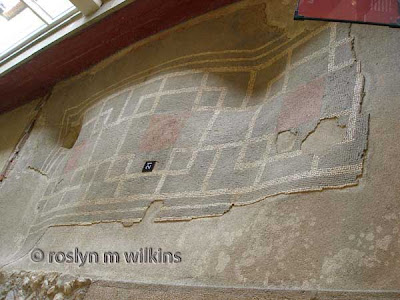 Mosaic conforming to contours as floor warped beneath it.
It cannot be straightened out as the mosaic pieces have stretched.
In a couple of places it was discovered that a newer mosaic had been installed over an older one, rather than removing it before laying the later one over it. In other areas, the mosaics were laid over post holes from the original wood building so they have sunk into the floor. About a thousand years ago, give or take a few, farmers plowing the land unearthed some of the mosaics and building foundations. But it meant nothing to them, and they went on about their business.
Despite the damage from disasters, ploughshares (or plowshares depending on your version of the English language) and robbers, the mosaics have remained in good enough shape to give us a reasonable idea of what they looked like when they were enjoyed by visitors to the Palace. 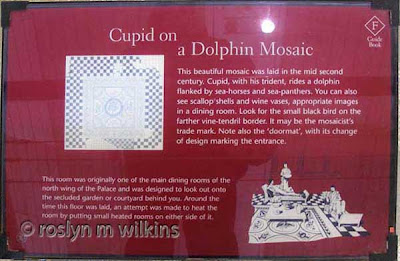 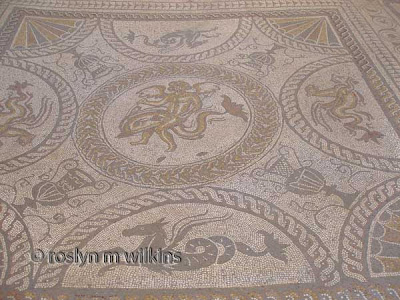 The Palace is well signed both indoors and out. So with the help of the illustrated guidebook I mentioned in Part One, and reading the informational plaques, the visitor is treated to a pretty thorough understanding of the life and times of the mosaics and the building.

Looking at the covered North Wing from the gardens.
The southern half of the gardens and the rest of the palace remain buried
under the town of Fishbourne. 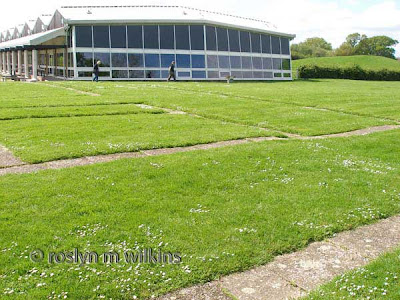 Concrete demarkations in grass show where walls
would have been in East Wing of the Palace.The gardens have been reconstructed according to what is known about Roman horticulture, completing the picture of what this magnificent building must have been like almost two thousand years ago. Now I am back in LA, I wish I could just jump on the train and spend another day at Fishbourne.

Click here to read Part One of this blog post. Later on, when I have more time, I'll be posting a photo album of Fishbourne.