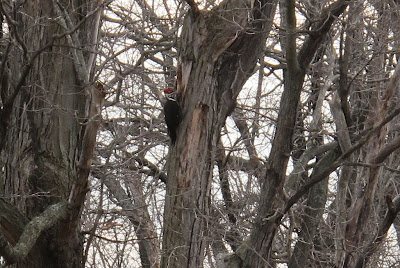 Pileated woodpecker in my goat yard

The other day while we were boiling sap, two Pileated woodpeckers landed on trees across from our camp, in my goat yard. I was able to get some pictures of them and also a video. They are so much fun to see and it was a real treat for them to hang around, usually they fly as soon as you get too close to them.

We spent all day in town running errands so we didn't boil today. We have about 2 gallons of syrup now, and with the sap we have left we should be able to get another gallon. We'll start boiling again tomorrow morning. The sap has stopped running since it's not going below freezing at night. It was a very short run, we can't seem to get cold enough weather here and tonight we are getting thunder and lightening, which is not a good thing this early in March.

While I was outside with the little dogs this evening, the coyotes started howling by our maples, and when they quit, and the skien of geese that was going over passed, I could hear a familiar voice by the creek that runs by the house... Meep... Meep..... Meep.

The Timberdoodle, otherwise known as the Woodcock was calling. They are the silliest little birds, when I get the chance to see them they always crack me up. For a long time I couldn't figure out who was meeping by the creek in the spring, calling in the early evening. It almost sounded like a frog but I knew it must be some kind of bird. Then one night on the way home from a hike, we came across a Timberdoodle in the road, he froze, and we froze as our light shone on him in the dark. Then suddenly he broke the silence with a meep and I just about screamed - that's who makes that silly noise!

It's early to hear them as well. It seems everyone is out and ready for this early spring. 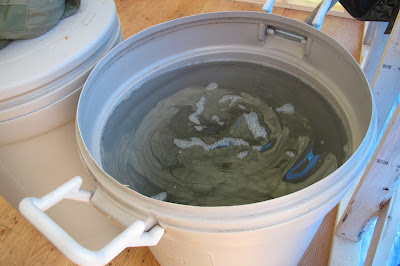 sap waiting to be boiled

The best part of making maple syrup is when you finally get to taste a hot spoonful (or three...) right out of the pan, of sweet heavenly, syrup. Syrup that you've been boiling for 10 hours straight. Syrup that tastes so good because it came from your own maple trees and your own hard work. That terrible pain in your back? The syrup caused that, but you'll forgive it because it's so darned delicious. 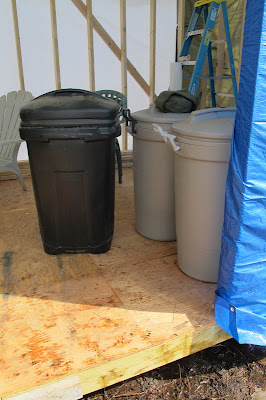 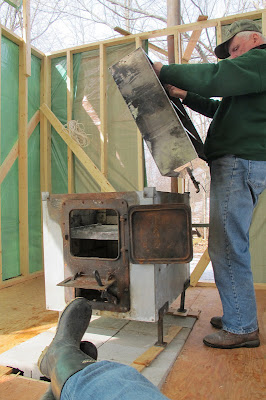 Putting the pan on the evaporator (hey, I'm not just sitting down, I'm documenting the process...) 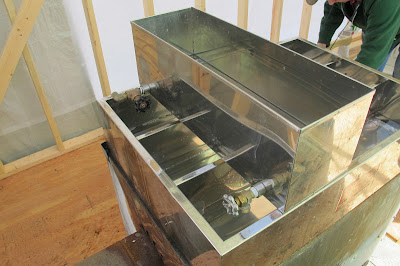 You put the cold sap in the top, in the preheated and let it trickle down into the hot pan, a little at a time 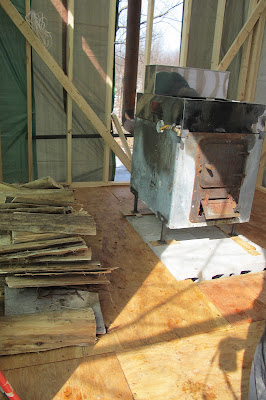 starting to pile in the cedar by the evaporator 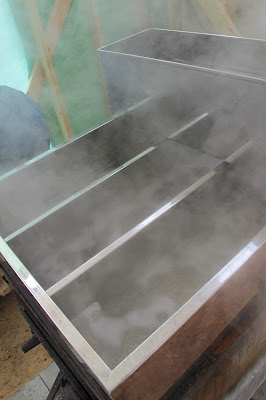 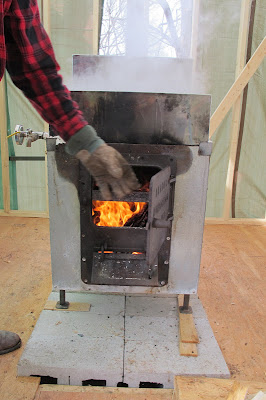 getting our first fire going
The worst part is the fatigue. It's exhausting. It takes about 10  hours with our evaporator to evaporate 40 gallons of sap to make one gallon of syrup. You need at least a face cord of wood to make one gallon of syrup. Dry ash or maple, split up, and then loads of cedar to keep the heat roaring. You can't leave the evaporators side for all that time because you cannot loose your boil, so you must constantly keep the fire going at a hot enough rate to keep your boil up, and you have to always be watching to make sure you don't scorch your pan which can happen in the blink of an eye. 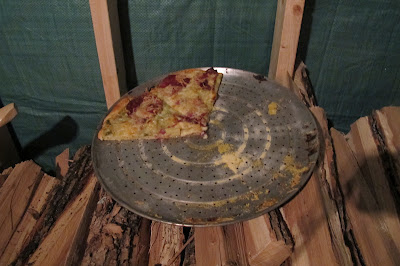 late night pizza in the sugar shack, what's left of it! 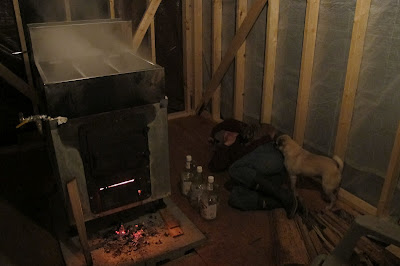 trying to take a break by the fire... Norman is using me as a pillow and Douglas wants to know why I'm on the floor - and no we didn't drink those empty bourbon bottles, we use those for syrup! 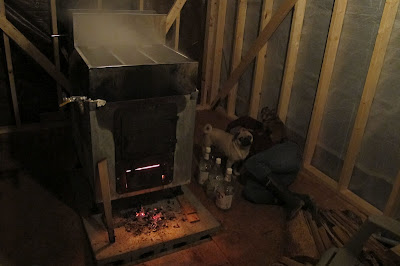 But when the temperature gets up near syrup, you remember why it is you are working so darned hard... That thermometer needs to be a 7 for syrup. 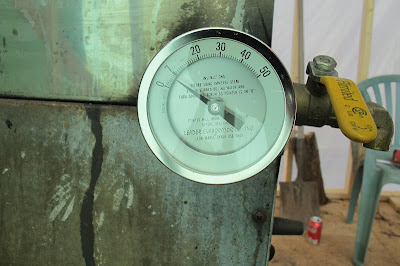 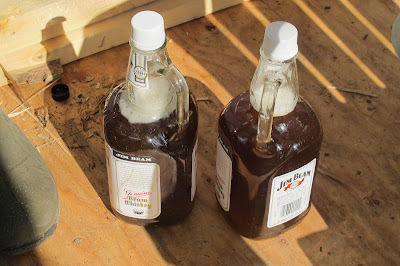 our first two bottles of syrup! the syrup goes in here until we process it through our new canner and into it's bottles. 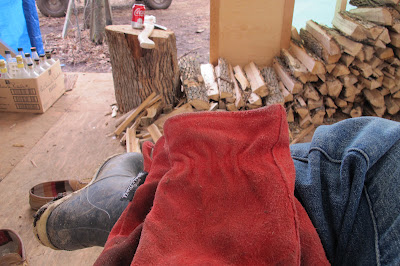 I've been splitting wood for three days. I've learned that I enjoy running the splitter on my own, it's really relaxing to not think about anything but the task at hand, breaking down rounds into firewood one cut at a time, and to be able to see that pile of wood you are making grow larger and larger with every cut.
In the dark one night of boiling,  I brought the little dogs to the sugar shack along with the pizza I had made, and Kevin lit the propane lantern. It was gorgeous outside - still warm at midnight. The fire in the evaporator was white hot - so you didn't even need gloves or a coat inside the sugar shack. We ate pizza by the fire and Norman soaked up the heat, while Douglas started moving the cedar sticks from their pile to a new one, one by one. These are the best moments of boiling, you are exhausted, but in the deep of winter, you dream of these late nights boiling with the warmer air, the hot fire burning and the sticky sweet smell of syrup in the air.
However by about 11 PM, after a full day of running around, standing, lifting, splitting wood, bending... your body isn't completely with you, it's pretty much half asleep and you are just pushing along.
Once you decide to quit boiling for the night, you can't just walk away. You've got a super hot fire burning and it will ruin your syrup if you leave it and scorch your pan so bad you'll never recover physically or emotionally from the trauma of it all. It takes a while to learn your own way of doing things. It really is an art, like anything, gardening, brewing, wine making...etc.

These are days of hard work, great rewards, and messy kitchens. Days of reminding myself why I love my crock pot so much, and how badly I wish I had a maid to pick up the slack in the house while I'm outside working all day long. My laundry and kitchen get put on the back burner while I'm out working. In between wood splitting and helping with syrup, I've been spring cleaning in the barn when I can and also working with Izzie the Jersey on lead... part of her recent bad behavior has been her pushing the limits - she's pretty spoiled, lets just admit it and she's acting like a spoiled brat, which she is. She pushed me into the fence about a week ago and tried to knock me down - because I had treats and she wanted them right away instead of in her bucket where I was heading to put them. Since then, she's been on a more strict regiment - walking on lead, etc, and I've seen an improvement since, which I hope continues. Apparently like kids, cows also go through the terrible twos.

The fire is roaring in the house tonight only to take the dampness away. The dogs are passed out and snoring, and the Prairie dogs have called it a night. The birds are still munching on their evening snacks and us people are preparing to call it a night so that we can get up and start work again tomorrow. I have a stack of dishes in the kitchen calling my name, hopefully before I fall asleep, I'll be able to silence them.