the very best part of being on the farm/out in the bush is? 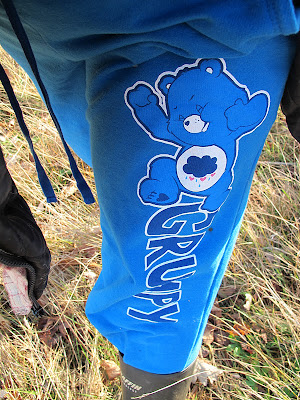 Getting to wear my jammies whenever I want, wherever I want.

We went out to the big creek to pull the canoe in today... This morning all the snow was gone and it was warm outside again. I woke up and looked outside the bedroom window and got a shock when there was a turkey looking back at me. But not just one... Seven of them! Seven wild tom turkeys were milling around outside the bedroom, peeking in the windows from time to time. 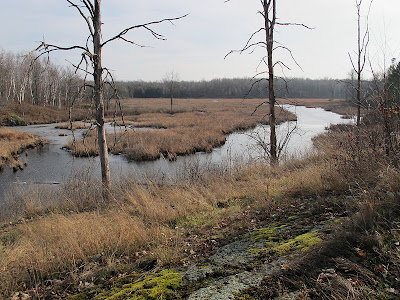 There was a teeny bit of ice still in the creek... 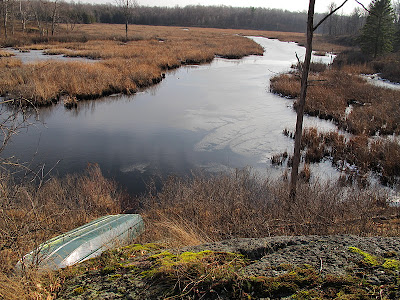 I got to watch them pull the canoe out, which was nice...  No work involved for me! 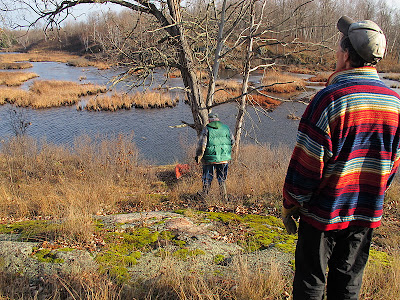 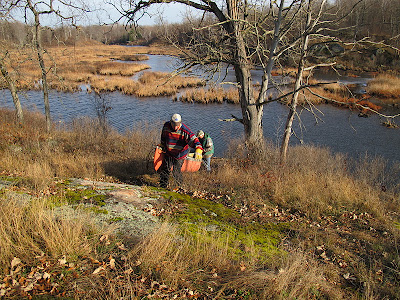 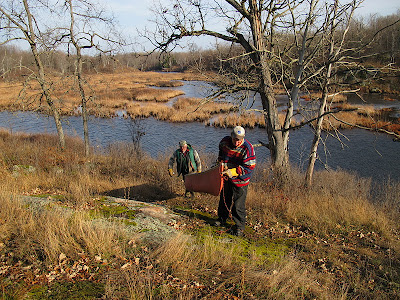 When I came home with Kevin's cousin Greg in the mule (Kevin carried the canoe home on the argo behind us) Max was running towards me from the house. Ah... he's not supposed to be there.

I hit the break and jumped out of the mule. Max came to me right away as he always does, and I put him in the goat yard. I knew right away what had happened. I changed up my routine and this morning I didn't fully hook the gate (I always check it twice! but apparently not this morning) the second time I went through it with the mule (I rarely take the mule into the barnyard, I'm always on foot.) So after Max was away, I drove up to the barnyard, um....rather quickly. I wasn't afraid anyone would run away really, but maybe the turkeys would, and Lambie was in there and he can't see....

As I approached the gate, Sammy Saanen was standing outside the gate. He saw me running and ran straight back into the barnyard! It was hilarious. Everyone was there, including all the turkeys, except for Lila and Horace, the two other sheep. Where did they go when they had the option of going anywhere on the farm? Across the road, through another gate into their summer pasture. I guess they figured maybe there was still grass in there. Never mind the entire farm/forest that was surrounding them!

Most of the day, Max has been basking in the barnyard spotlight. He thinks he's pretty special now... he enjoyed a nice big treat. (Don't worry, Flavious did too, we don't play favorites here, not in front of everyone else...) 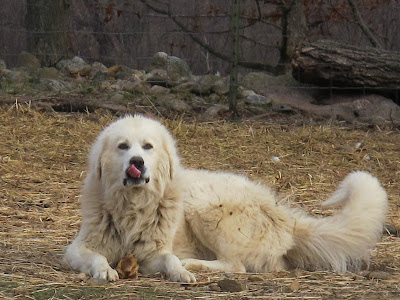 Everyone enjoyed the warm air and sunshine. Especially after the fright they had when it snowed the other day.  Most of them didn't even seem to notice the gate was open and just carried on about their usual business (meaning, filling their faces.) 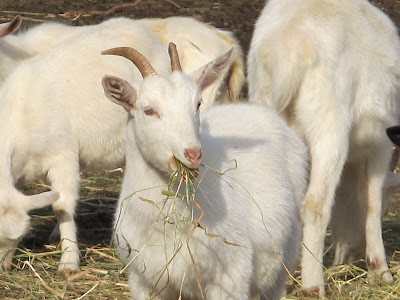 the cookie monster doing what she does best... munching! 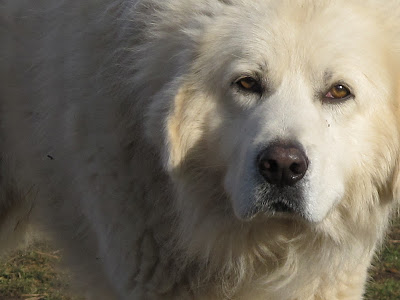 Max is pulling his "I'm famous now, you can't take a picture of me without giving me half the cut anymore..." look...
Yesterday afternoon I went for a hike before the snow melted... just a short one to look for tracks. Back in the juniper bushes East of the house, I found some trails with a lot of buck tracks. Our two big bucks haven't been seen for weeks now. I was hoping to see some sign of them. I think there is a good chance the buck tracks I found, judging by size, are from the little spike buck we have hanging around, and not either of our big ones. 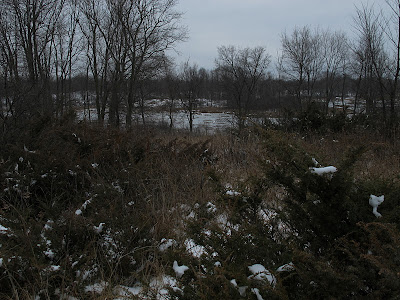 On the trail, I almost stepped on this ant. There were bugs everywhere yesterday, crawling, flying... it was so warm they were on the move and probably a little confused as to what time of year it was exactly. 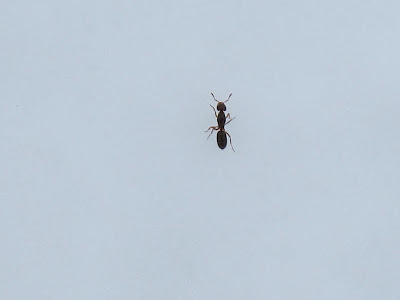 Our pond at our dam road was breaking up pretty quickly. The beavers food pile is almost out into the center of the pond it's so big now.  To be honest, it freaks me out a little bit... I hope they don't know something we don't about the coming winter. 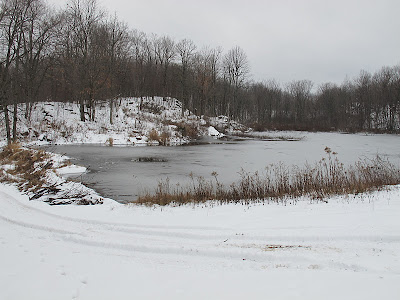 The little marsh behind the house looked really pretty on the way home. It's usually full of ducks in the spring, in winter, the deer use it a lot for crossings to the fields behind it. 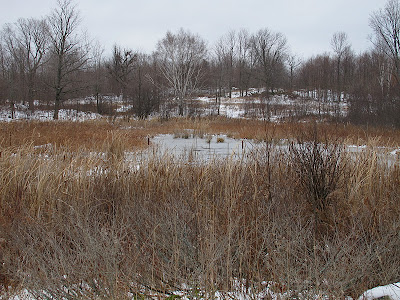 On the way past the goat yard, Bulrush and Baby looked a little... what's the word? Um... desperate. 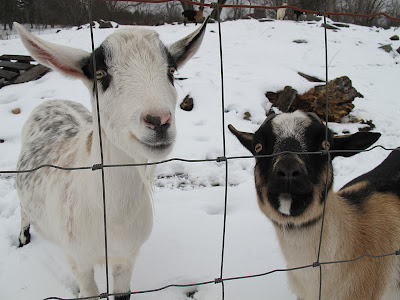 our feet are getting wet out here! we are cold!

Flavious didn't seem worried about anything, as I passed by he didn't even open his eyes. He was having a pretty serious snooze. 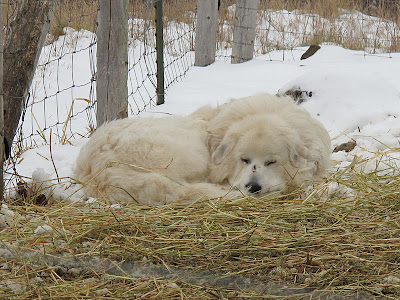 The reserve wood pile at home has been growing, it's all even height now. We'll cover it up now that the snow has melted and leave it for later in the winter if we need it. 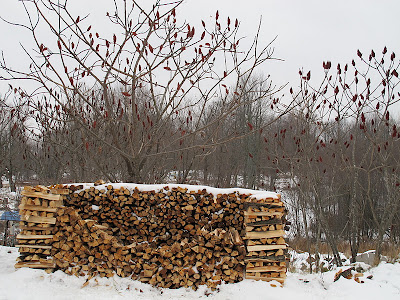 Tonight the sunset was beautiful... It's looking like tomorrow will be another nice day, another day we can finish catching up on chores before the snow returns. As the saying goes "pink sky at night, sailors delight." 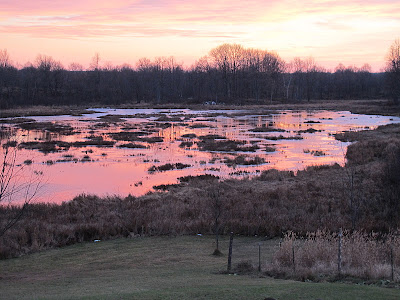 This evening, the fire is going (not that it's really cold).... and we are getting settled in. After I cook dinner with my helpers, who are pretty anxious to start the preparations, 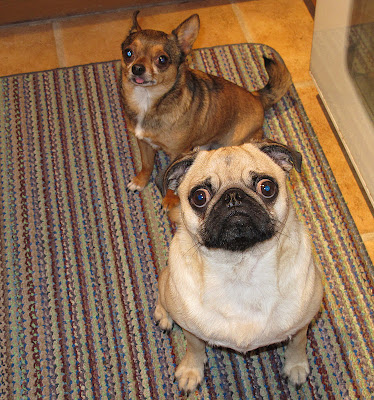 I'm looking forward to watching a movie on our new PVR... We got it a few days ago and I'm so excited that I can record T.V. shows and movies I'd otherwise never be able to watch because of the time they are on during the day or night... this little box has changed my life! I've been recording all kinds of movies I can snuggle up with the dogs and watch during the coming days when it's dark so early and the weather finally forces us inside. Thank heavens (sometimes) for technology!