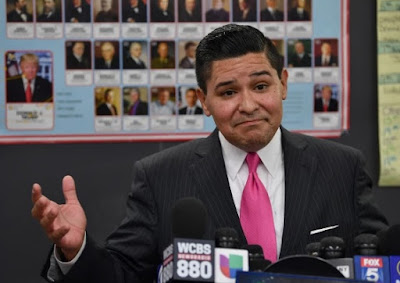 I actually feel sorry for DOE spokeswoman Danielle Filson. She has to support the NYC Department of Education as a public agency that puts children, the law, and ethical employment policies in place when this is so obviously untrue.

See the story about Deputy Chief of Staff David Hay, just one example; another is the harm that Francesco Portelos has done to children, co-workers, everyone who crosses his path and yet remains a permanent teacher paid with a sweetheart deal by the NYCDOE.

Lucio Celli, who in November 2018 threatened to stab to death three judges in the Federal Courts, was put in jail then released on bond paid by his parents with the condition that he is prohibited from using the internet (and thus cannot have any contact whatsoever with kids or anyone) and he cannot leave his parent's house ....yet remains, throughout 2020 according to seethroughny.net on salary at $118,000.00:

Celli's criminal trial starts on May 17, 2021, in the Eastern District Court in Brooklyn.

My work centers around helping teachers who are being charged with acts they never committed and are being placed into 3020-a arbitration disciplinary hearings where the DOE's focus is on termination of employment. So many of these educators are innocent. Lucio Celli however has never been brought to a 3020-a. Francesco Portelos was and received a $10,000 fine with a warning to stop his harassment of co-workers. He ignored this and set up UFT Solidarity, which in my opinion is a hate group that attacks anyone who someone says did something bad, without proof. I and others call this libel and defamation.
Teachers are picked randomly to be charged and terminated, but one common theme is that no one can say anything bad about a principal or higher-ups in the DOE leadership (except, it seems, for Portelos and UFT Solidarity):NYC Education official likened Stuyvesant High to Chinatown: lawsuit
It is interesting that an educator no longer works at the DOE after reporting a "derogatory" statement with the word "Chinatown" in it? Huh?
What is most worrisome is the fact that politicians in NYC are not doing anything to change the policy of "hands-off" to the unethical hiring practices or actions by the DOE.

The press secretary to Comptroller and Mayoral hopeful Scott Stringer is quoted below as saying,

" “The DOE often spends beyond registered contract maximums before submitting amendments or extensions to the comptroller’s office,” said Hazel Crampton-Hays, press secretary for Comptroller Scott Stringer."
When Mr. Stringer was Public Advocate, he also looked the other way when I brought information to him about NYC DOE policies that harmed parents and students, such as the case involving Johnnie Mae Allen and her son.

Without any consequences to bad acts, those people who choose to commit bad acts will continue to do them. The New York state legislature should pass legislation holding the Department and the Mayor accountable for misconduct and actions which are improper or wrong under state laws and common sense.

The California ed-tech firm that hired ex-schools Chancellor Richard Carranza cashed in on the COVID-19 pandemic in NYC, reaping millions of dollars from the Department of Education under his reign, records show.

IXL Learning, Inc. — which named Carranza its chief of strategy and global development — has been paid $3.3 million by the DOE in the past two years alone.

The Silicon Valley outfit has collected $2.1 million in NYC taxpayer funds this school year. That nearly doubled the $1.2 million it made last school year as the DOE expanded remote instruction, according to records compiled by the city comptroller’s office.

Observers expect IXL’s windfall to grow with Carranza as its salesman.

He “brings to the table a wealth of contacts and people who owe him favors” in New York, Houston and San Francisco, where he has led school districts, said Alina Adams, a Manhattan mom and writer who runs the website “NYC School Secrets: Parents Helping Parents.”

“Some of the people in charge of deciding whether or not to buy IXL products will be the same people that Carranza hired.”

Under NYC laws, city employees may not seek jobs — including submit a resume, discuss opportunities, or interview — with a company they are dealing with as part of their city job, the Conflicts of Interest Board (COIB) states.

Carranza announced his resignation on Feb. 26, saying he needed time to grieve 11 loved ones lost to COVID-19.  IXL announced his hiring in a press release dated April 1, less than three weeks after his last day as chancellor.

The company did not respond to questions about when they began negotiating with Carranza. The DOE said Carranza “followed all job-hunting conflict and recusal rules while securing his job with IXL”

Other rules prohibit former city employees in the private sector from disclosing or using “confidential information” for personal advantage. They can’t communicate with their former city agency on behalf of a new employer or business for a year. And they can “never” work on a matter, such as a contract, for a non-city employer if they worked on it for the city.

“It’s a judgment call on what inside information falls within the prohibition,” said Brooklyn College and CUNY Grad Center education professor David Bloomfield. “It will be hard not to use the information [Carranza] has to benefit his new employer.”

DOE spokeswoman Danielle Filson said, “Former Chancellor Carranza has pledged to follow all conflicts rules and will not engage with DOE or NYCDOE school officials on behalf of IXL for one year.”

The DOE has paid IXL about $5.6 million since 2011, the comptroller’s records show.  In 2016, under former Chancellor Carmen Fariña, the DOE awarded IXL a seven-year contract at a maximum cost of $1,041,869, but payments have exceeded that — against procurement rules.

Since last year, the DOE has installed IXL software, among others, in some 500,000 city-purchased iPads for students to study remotely due to COVID-19. This did not cost extra, the DOE said.

The DOE could not vouch for the numbers and IXL would not explain their basis.

Many online reviews by students and parents nationwide blast IXL software, which “gamifies” instruction, for a point system that brings some kids to tears.

“I once walked into my daughter’s bedroom to see her poised to SMASH her computer on the floor after 3 hours of IXL,” a parent wrote.

A 17-year-old said in a post that nine of 10 kids “not only hate IXL but would rather read a hardcover book. That’s not normal for this generation.” He added, “I’ve also found that while answering questions in IXL people tend to get anxious, angry, upset, frustrated, and sometimes depressed.”

As chancellor of the city’s public schools, Richard Carranza talked endlessly about equity. But maybe he was using the job to build his own “equity.”

In late February, Carranza announced his exit as of March 15, tearing up as he said he needed time to grieve 11 family and close childhood friends lost to the coronavirus.

Now comes news that Carranza has taken a job with California firm IXL Learning, an e-learning company that landed $3.3 million in contracts from the city Department of Education on his watch, and about $5.6 million since 2011.

The Post’s Susan Edelman reports that the Silicon Valley firm collected $2.1 million this school year and $1.2 million the year before, profiting greatly from the DOE’s rush to make remote instruction work.

IXL sells educational software on math, language arts, science, and social students for grades K-12, programs now installed in some 500,000 city-bought iPads handed to students as the pandemic shuttered schools (and the United Federation of Teachers kept them closed).

Hilariously, ethics rules mean Carranza can’t work on IXL’s accounts with the city for a year. Yet cynics will suggest he’s already gotten plenty of value out of New York for the company, which surely made it easier for him to get the new job. Indeed, its income from the DOE was rising on his watch even pre-COVID.

Michelle Caruso-Cabrera, a Democrat running for city comptroller, is calling for an independent investigation into any conflict-of-interest rule-breaking or bending of procurement rules here. “It’s outrageous that millions of taxpayer dollars were awarded by the DOE to a company whose learning programs have been blasted by parents and students at the same time that the former school chancellor was interviewing for a high-powered position at that same company,” she told The Post.

It stinks to high heaven that IXL Learning’s new “chief of strategy and global development” was in charge of city schools at a time when the company made out like a bandit. Current Comptroller Scott Stringer and/or the Conflicts of Interest Board should certainly take a look.

If it turns out to be perfectly legal, then the city needs better protection against such incestuous games. 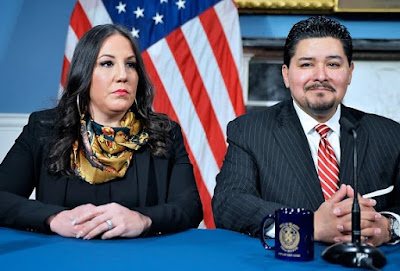 Richard Carranza was fined for taking his wife, Monique, to see "Hamilton" on Broadway
using a Department of Education ticket.[Matthew McDermott for NY Post]

He was a bad actor.

Former schools Chancellor Richard Carranza improperly took his wife on a Department of Education outing to see the hit show “Hamilton” — and the abuse of power got him slapped with a $1,100 fine, it was revealed Thursday.

The departed administrator, who landed a private-sector job with a California education tech firm that does business with the DOE, brought his spouse to a special production for employees in April 2019.

In a statement, the New York Conflicts of Interest Board said Carranza should not have purchased a special $10 discounted ticket for his spouse since she was not a DOE employee.

“The Chancellor used a ticket for his wife that typically would have been distributed to DOE employees,” the agency said in a release. “He paid $10 for the ticket, which was the price listed on the tickets for DOE students and chaperones.”

The former city school's boss told the board it was an honest mistake.

In his case disposition, Carranza claimed his chief of staff erroneously told him at the time that he could take his wife as long as he paid for his ticket.

“I attempted in good faith to comply with the applicable rules,” he said.

The board ruled the purchase constituted a “misuse of city position” and demanded that Carranza cough up a fine.

“In using the ticket for his wife, the Chancellor used his City position to benefit his wife, a person with whom he is ‘associated,'” the agency said. “The now-former Chancellor paid a $1,100 fine to the board.”

The Richard Rodgers Theatre event was emceed by a cast member and included student performances, a question-and-answer portion with “Hamilton” performers, and a matinee performance.

“We hold all of our City employees to the highest possible ethical standard,” said DOE spokesperson Danielle Filson. “The former Chancellor has acknowledged his mistake and the Board determined the penalty.”

After three rocky years at the helm, Carranza left the DOE in February. He cited the loss of friends and family to COVID-19 as a contributing factor and said he needed to heal emotionally.

He soon landed a gig with IXL Learning, a firm that has long done millions of dollars in business with the DOE.

Holden called for a federal investigation in a letter to acting Eastern District US Attorney Mark Lesko.

The DOE has said that Carranza’s transition was above board.

“Former Chancellor Carranza has pledged to follow all conflicts rules and will not engage with DOE or NYCDOE school officials on behalf of IXL for one year,” a DOE spokesperson said of Holden’s concerns. 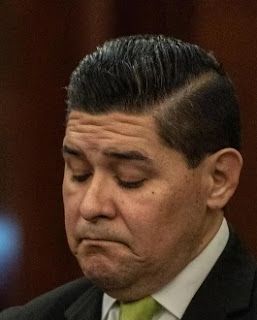