Jan, the Mid-Westerner, here, with another birthday cake. At our house, we have birthdays in three months of the year: May, July and November. And today is my husband's birthday!

The bison at Custer State Park were enjoying the sunshine on Saturday.
We celebrated last night, since everyone was going to be at home.

I'm serious. You try getting six adults together when four of them either work two jobs or work plus go to school full time. We're rarely all in the house at the same time.

But Sunday night, after church, we're usually all here. 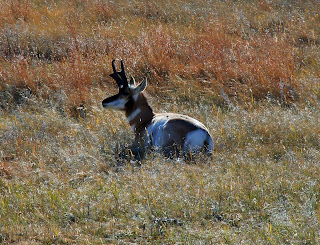 A Pronghorn buck - the ladies were on the other side of the hill.

Now, my husband's favorite cake is German Chocolate. He loves the blend of chocolate and coconut...and I've found the perfect recipe. I've made every year for the last five or six years.

The original recipe is from the 1980 edition of the Better Homes and Gardens Cookbook. My copy was a bridal shower gift from a co-worker, and every time I read the inscription I think of her.

"Many happy years of cooking and eating for both of you! Clara 5/9/82"
Do you inscribe books you give as gifts?

Anyway, I've tweeked this recipe, like I do most of the ones that have been around for a few years, and here's the current version:

Making a cake from scratch is a worthwhile skill to learn. It isn't hard, but it does take time and care.

The results, however, are worth every minute you spend :)

If you've ever watched a cooking show on television, you know how the cooks always have their ingredients pre-measured before they start cooking. Don't they make it look easy?

Well, we're going to do the same thing - it's prep time!

1) Bring the butter to room temperature in the mixing bowl.

2) Melt the chocolate with 1/3 cup water - I use the microwave. Thirty seconds is usually enough. Stir until it's nice and smooth. 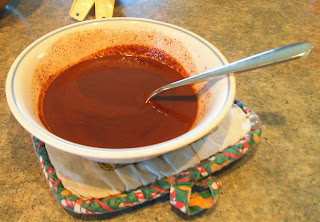 3) Measure the flour, baking soda and salt into a medium size bowl. Stir to combine. 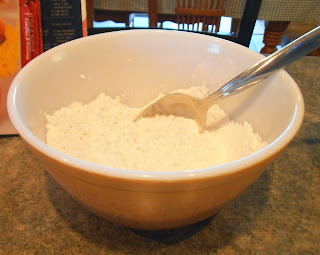 4) If you don't have buttermilk, make sour milk by combining 1 teaspoon lemon juice with your 2/3 cup milk. Let sit for five minutes.
5) Prepare your cake pans. I grease them with coconut oil, then lay a piece of parchment paper on the bottom. 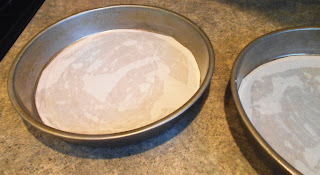 6) Separate your 3 eggs. Put the yolks in a small dish, and reserve the whites.
7)Preheat your oven to 350°.
Now that the preliminaries are done, it's time to start making the cake.Cream the butter for 30 seconds, and then gradually add the sugar and vanilla. Beat until fluffy.
Add the egg yolks one at a time, beating for one minute after each addition.Beat in the melted chocolate.Add the dry ingredients and the milk alternately, about 1/3 of each at a time, beating well after each addition. 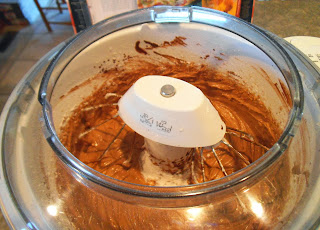 Now comes the part that makes a lot more dishes to wash.... You need to beat the egg whites.
In case you don't know this, egg whites and fat of any kind don't mix, so you need to use clean beaters and a clean bowl to beat them.
Transfer you cake batter to a large bowl, and wash your mixer's bowl and beaters.(The reason my mixer looks so strange is because it's a Bosch. Don't laugh. I can make six loaves of bread at a time with this puppy! He's a workhorse. Makes great smoothies, too, with his blender attachment.) 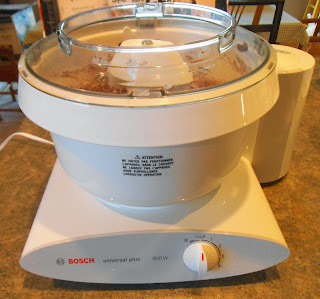 Now that your mixer is clean, beat those egg whites until stiff peaks form. Fold the egg whites into your cake batter, and then pour the batter into the pans.Bake in a 350° oven for 30-35 minutes.If you want a refresher on the method for making a cake from scratch, there's another version - a different birthday and a different cake - here.
After the cake is baked, and while it's cooling, it's time to make the frosting. This is what makes this a German Chocolate Cake!Coconut-Pecan Frostingor, if you don't have Pecans - just Coconut FrostingIngredients:1 egg2/3 cup evaporated milk (a 5 1/3-ounce can)2/3 cup sugar1/4 cup butterdash salt1 1/3 cups flaked coconut1/2 cup chopped pecans
In a saucepan, beat the egg slightly. Add the milk, sugar, butter and salt. Over medium-low heat, stir until the butter is melted. Cook and stir for twelve minutes more, or until the frosting is thickened and bubbly. Stir in the coconut and pecans. Cool thoroughly.This is enough frosting for the tops of two 9-inch layers, or one 9"x13" pan. 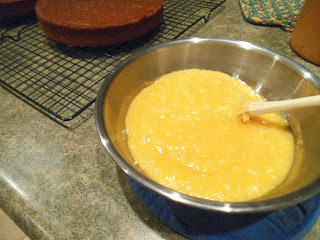 We've all seen commercial German Chocolate Cakes with rich, brown frosting. Well, mine always turns out this lovely yellow color. Maybe I could add food coloring, or cook it differently so the sugar browns somewhat...but it tastes so good, I hate to mess with it.
Frost the top of one cake layer, put the second layer on and use the rest of the frosting on it. Don't frost the sides of the cake - German Chocolate Cakes don't have frosting on the side. 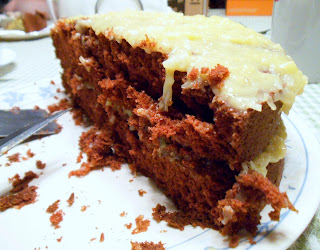 But, you know, this cake is so rich, you won't miss that extra frosting at all. 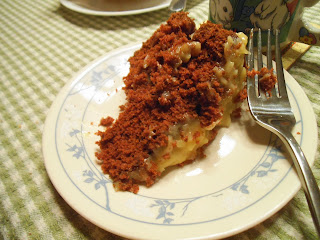 And it's so tasty, I wasn't able to get a picture without parts missing!
Another favorite thing for my husband on his birthday is going up into the Hills. Saturday was the perfect day. We drove up on the Iron Mountain Road and then down to the prairies in Custer State Park.
Every corner we turn, we just say, "I love living here!" 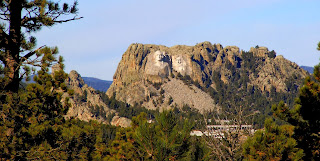 Mt. Rushmore from an angle you don't often see. 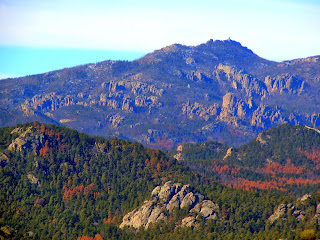 Harney Peak, with the Black Elk Wilderness in the foreground.