Getting Ready For NATO Summit

Warsaw takes centre stage this week as NATO leaders fly in to discuss transatlantic security issues. Towards the end of this week, the area around Okęcie airport will be a spotter's heaven, with all sorts of aircraft flying in, including a repeat visit of Air Force One, which I've snapped in Warsaw a few times already.

Last month I spotted one of four Sikorsky UH-60 Black Hawk helicopters heading for the airport. A few days later, when flying out of Okęcie, I saw all four on the tarmac by the military part of the airport. Here for the NATO Anakonda '16 exercises. 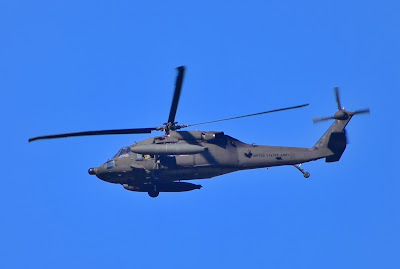 Today I watched this marvellous monster flying over Jeziorki - a Lockheed C-5M Super Galaxy. A modernised version of the C-5A/B, it struck me with how quiet it was as it flew over. Nothing out of the ordinary, noise-wise. But what a sight. Slightly smaller than the largest cargo plane to be seen from time to time around these parts, the Antonov An-124 Ruslan, the C-5M is nevertheless a fabulous and rare beast. I last saw one fly in to collect Barack Obama's car after his first visit to Warsaw. 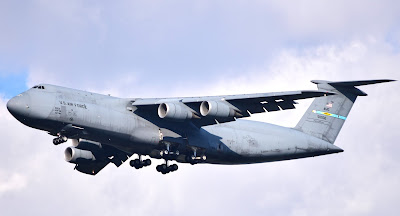 Following it along the flightpath, over the buildings by W-wa Dawidy station. Really quite something. Massive. 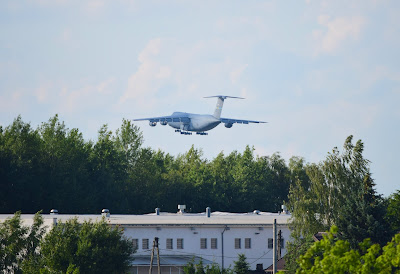 I hope for some more interesting aircraft pics this week!

This time three years ago:
In the highways and the hedges

This time five years ago:
Farewell to separate alcohol tills at Polish supermarkets

This time seven years ago:
To the countryside, Czachówek

This time eight years ago:
Why I feel freer in Poland than in the UK