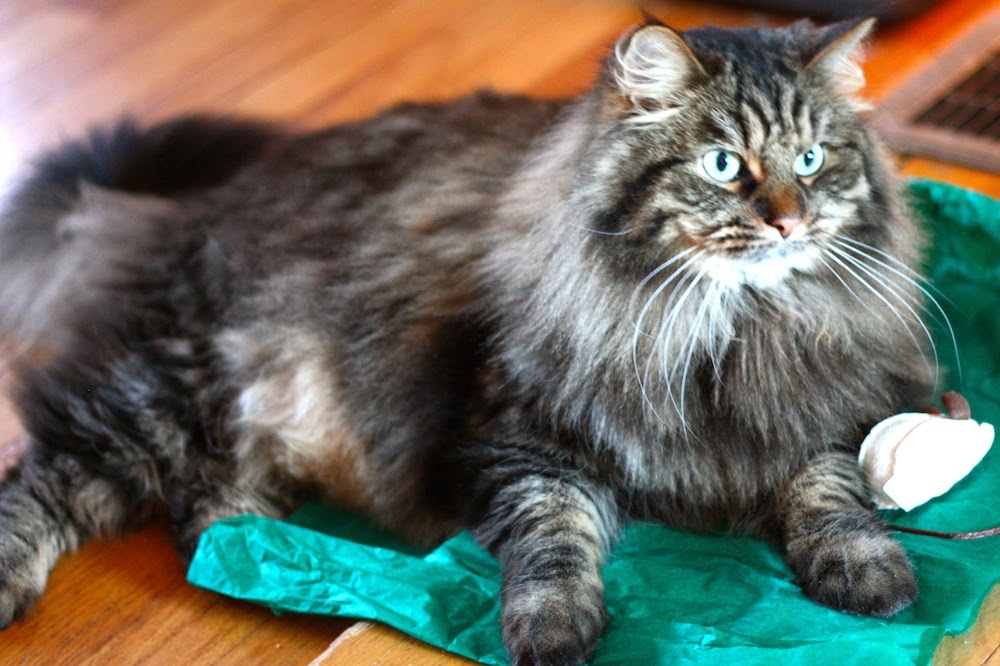 And someone's beautiful (grand)mother getting a Ben-knit scarf.Hi, hi! Do you feel bombarded with holiday irritants, and I'm not part of the solution because I'm here talking about it? I'm sorry! But, as you may know, I'm a real books-and-games kind of person. Which is why that's what I recommend year after year. Speaking of, there are past ideas to browse, if you like:
2014 mid-year book and game recommendations are here and here.
Last year's gift ideas are here. (Those pens were a crazy hit, by the way, even beyond being spirograph-friendly.)

And the year before: here.

Also, there's a games index and holidays + craft index, both in the upper right hand corner of this blog. See them up there? There are lots of ideas there, for things to make and do and get, including pretty much all of our favorite games. But these below are what I'm recommending this year. Either because they're things we're in the thick of enjoying ourselves or because they're things we (or I) am giving this year. Please share your own ideas in the comments. Please. I can't tell you how many fantastic books we've read and games we've played because of your advice. (Note: if you are a child or mother of mine, or a friend named Ava, please stop reading now.) 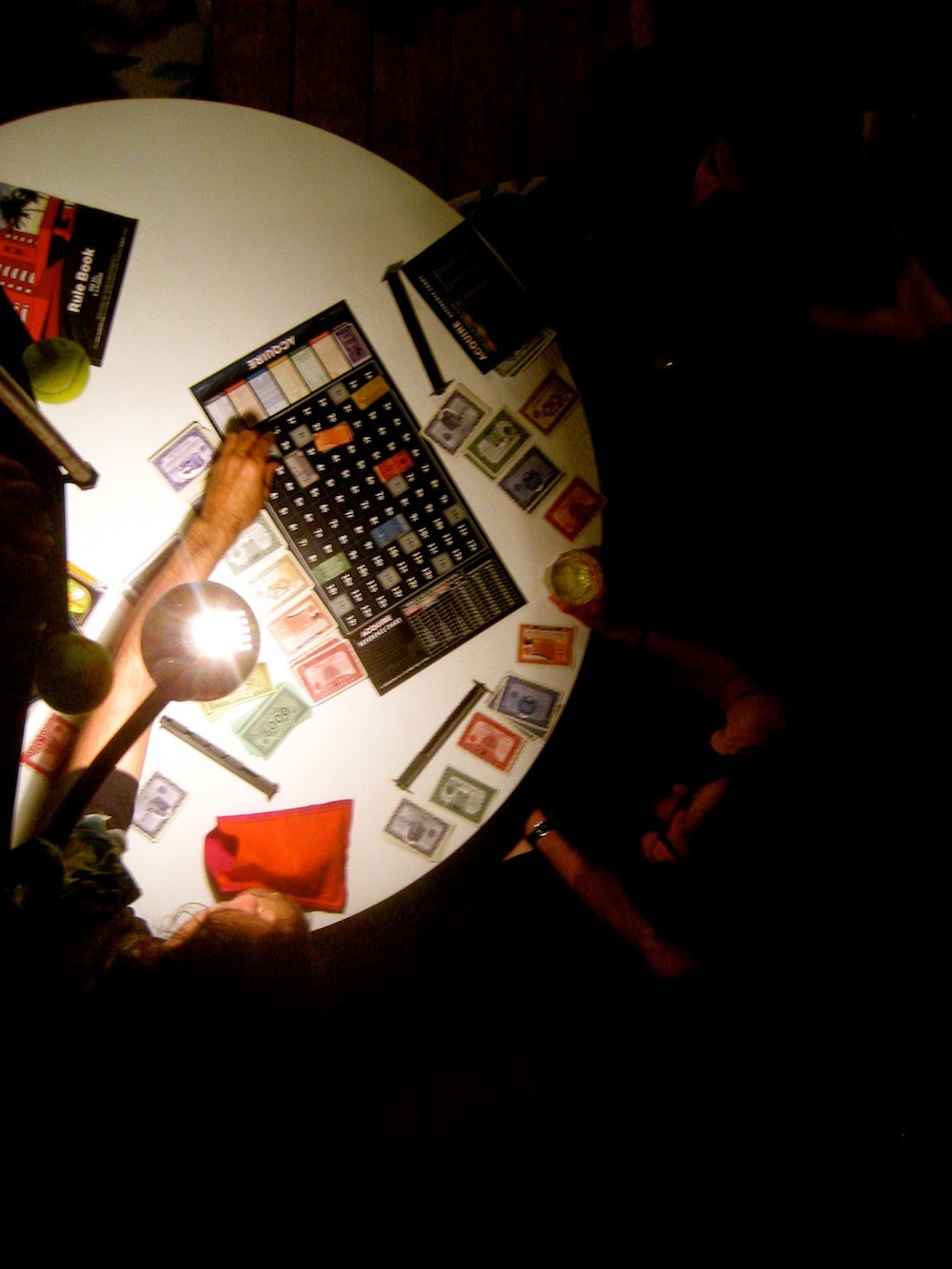 Cape Cod, Summer 2014.Acquire. I have been recommending this game for years--it's the first serious European-style strategy game we ever played--but I'm mentioning it again because it turns out we were PLAYING IT WRONG. It's so crazy, because it was still a good game, but it reminded me annoyingly of Monopoly, and now that we play it correctly, it doesn't. It is a brutal, but almost perfect, real-estate investment game that's interesting in part because there are actually multiple winning strategies (playing more cooperatively, say, or playing more wickedly), and so different types of gamers can play well. 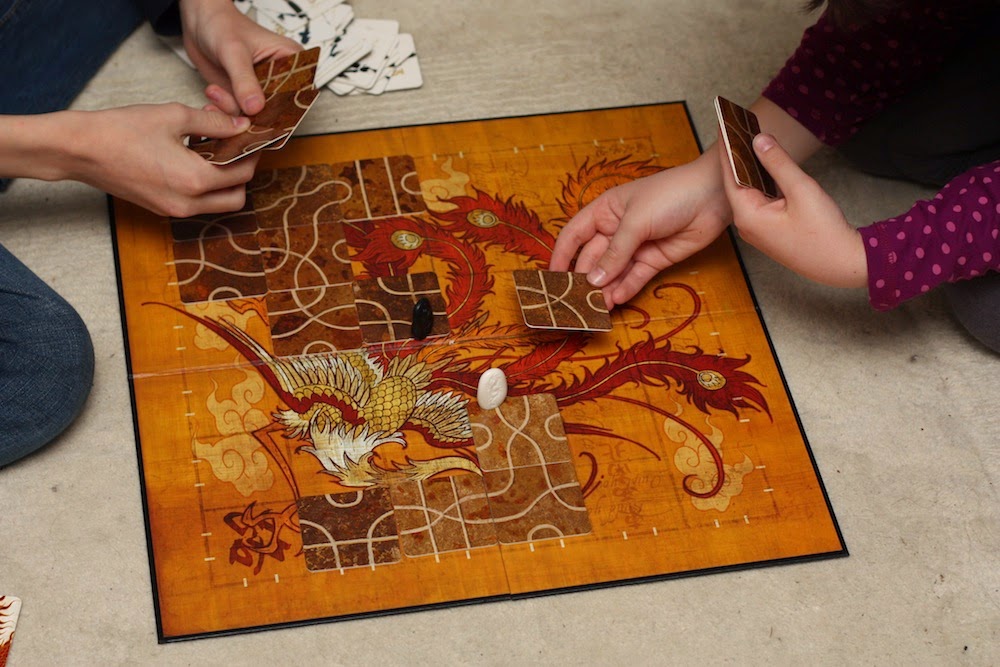 I made Ben and Birdy fake-play so I could take a picture. But then we ended up playing.Tsuro. Everyone here is making fun of me for mentioning this game here, now, because we've had it for years, and I used to be convinced it was boring and stupid. But, uh, maybe it was me, since we discovered this year that it's great: a deceptively simple maze-type game that has a fair amount of evilness built into it. Ben describes it as "A mix of spatial planning and sabotage." Also, it's got a lovely design and doesn't take very long--so if you're being tortured, it will all be over quickly. 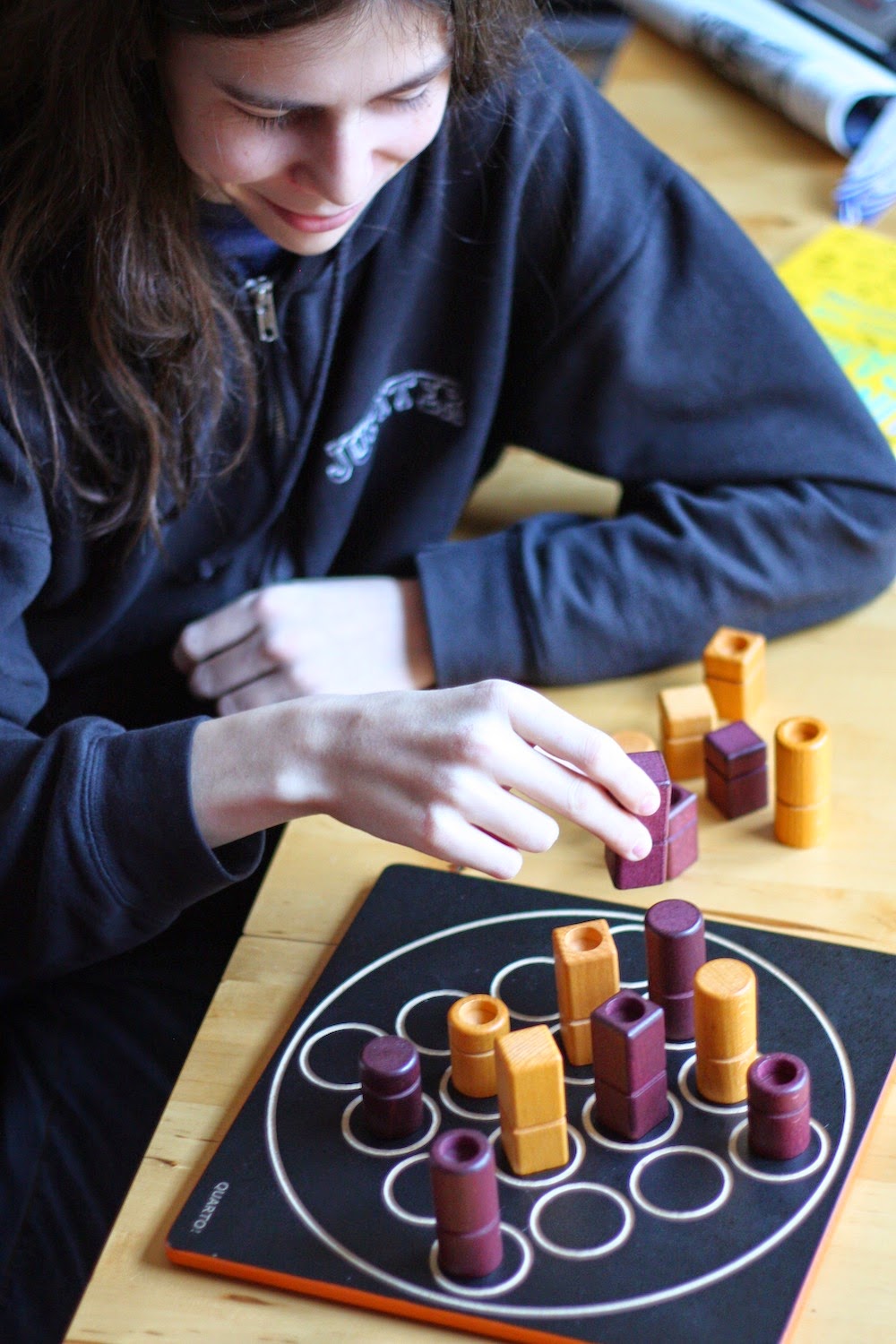 "Simple but very strategic," says Ben, shown here kicking somebody or other's ass, because that's what he does.Quarto is a lot like Gobblet: a streamlined, beautifully made tic-tac-toe-style two-person strategy game that seems stupidly easy until you lose and slap your own forehead and say the f-word. The heirloom-style wooden pieces make it an especially lovely gift. Because it's only a two-person game, we sometimes have Quarto play-offs, and the people waiting their turn play Gobblet or Connect Four in the meantime. Fun! 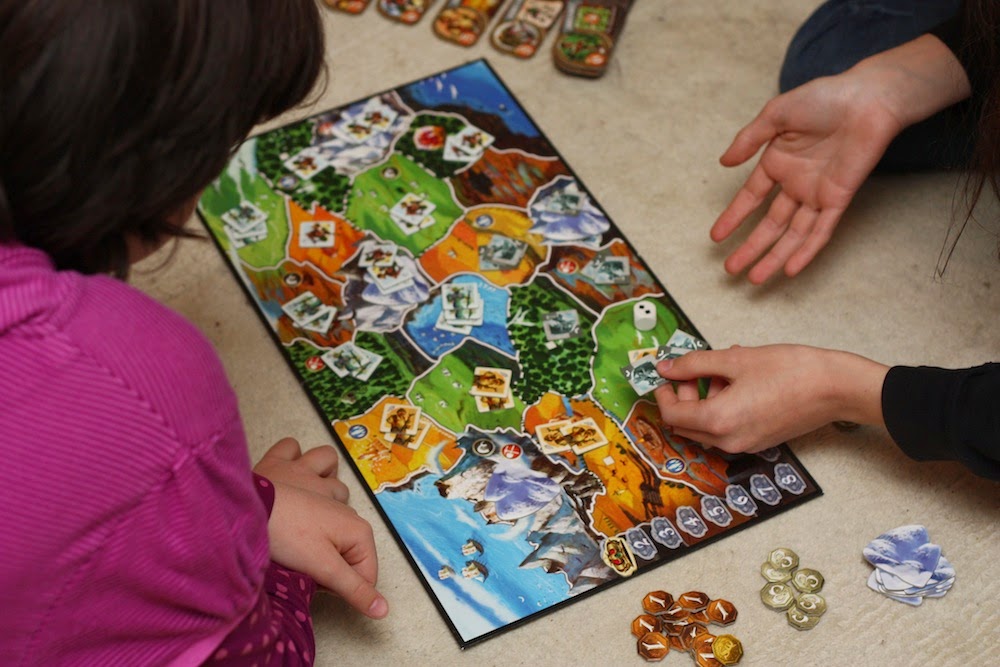 "It's an exciting mix between battle strategy and fun cartoony art." Ben, on Small World.Small World. This is our newest--a big, long doozy of a serious strategy game--and we've been playing it a lot. I have to tell you that I don't love it, because it's like Munchkin crossed with Risk, and I love neither of those games. That said, Ben LOVES it with a capital LOVES and it is the game he always picks if he is getting to pick the game we all play. Michael, who also loves Risk, loves it too. If you are needing a new strategy game, this is a good one, since it has, like, a million expansions you can collect. 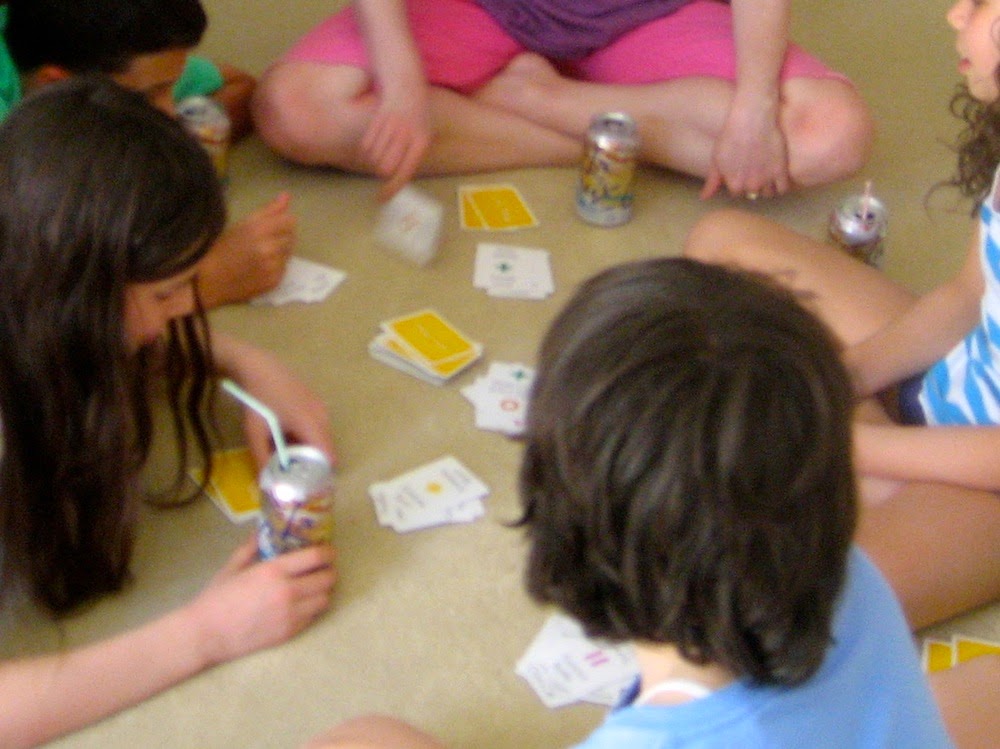 Anomia Seltzerfest 2014Anomia Party Edition. As Ben puts it, "Anomia, but more so. The categories are zanier and wackier than before." And that's not even including his friend Ava's homemade category, "Say the word hinkumbooby"! Six brand new decks make for tons of play value, and it's really the ideal party game. The kids and their friends (and sometimes us grown-ups) play it all the time, and it is our most-requested, "Will you bring ___ when you come over?" game. 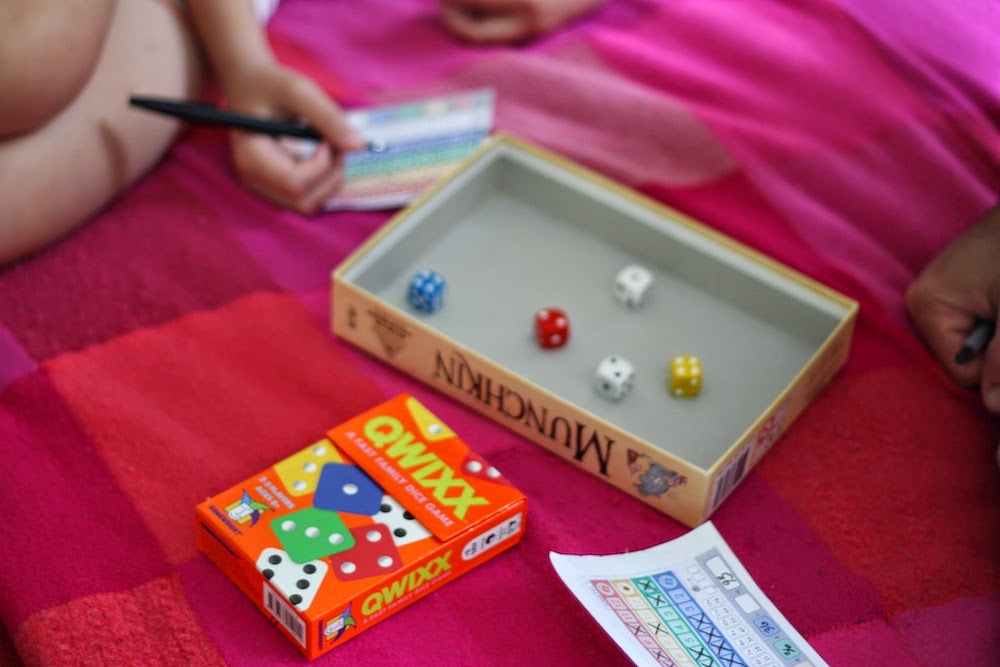 Qwixx. I mentioned this back in the summer, but it's a game that's turned out to have a ton of staying power. We've played a lot, continuously, and given it to many, many people as a gift. It's easy to learn and easy to play, not stressful, but strangely compelling nonetheless. Also packable and approachable and quick and relatively inexpensive. I love it. 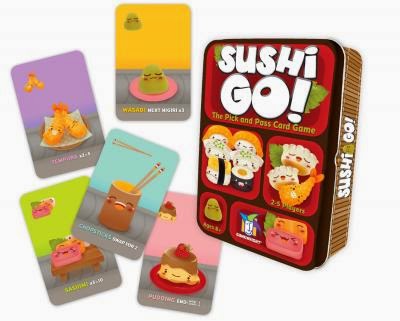 Also from Gamewright, Sushi Go is a great, smallish, stocking-stuffer-y choice that makes a really good introduction to strategy games. It's got a weird preemptive psychological element to it, like the way rock-paper-scissors does if you play too many rounds with the same person, and I love that. Plus the sushi-themed art is adorable and the colors are fantastic. 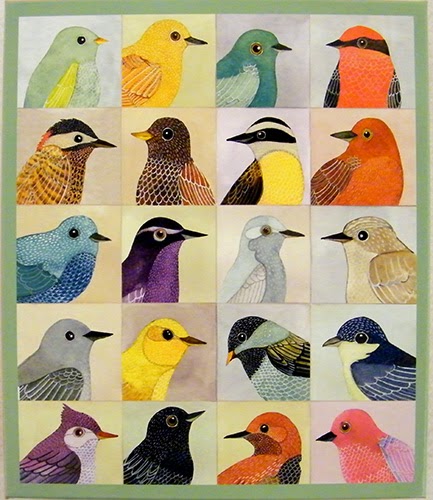 Avian Friends Jigsaw Puzzle. Oh, this puzzle. I have now done it twice this year, on two different vacations, and I loved it both times. 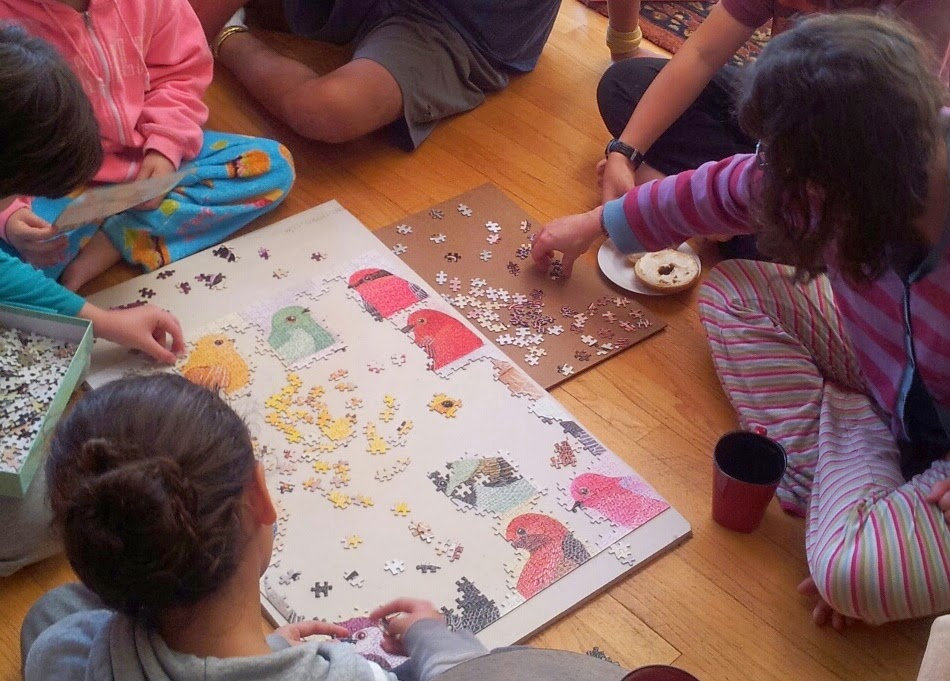 Yes, I'm in my pajamas doing a puzzle with a huge group of children. So?It's not actually the puzzle I got my family for the upcoming holidays (I got them this one), on account of us having already done it twice, but it's pretty much a perfect puzzle, with exactly the kind of perfect, pretty sections you can pick out and do, and then a nice hard-but-not-impossible border situation. 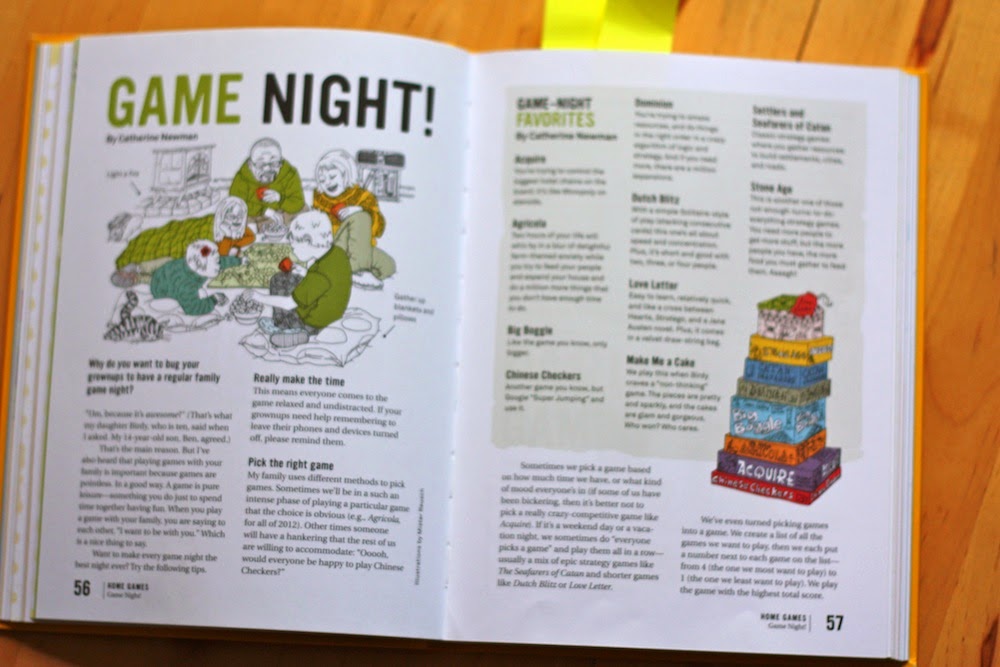 This is my own actual spread in the book!  That I wrote! About how we think about games! Maybe you should get it so you can really read it! And so you can see the illustration imagining that I have three kids and am married to a kind of hirsute hunk.I know I keep talking about it, but Unbored Games is such a good gift for both self-entertaining kids and kids who could stand to be more self-entertaining. It has so many ideas for games to play in pairs, in groups, alone, in almost any kind of situation. Active, passive, parlor. I love it. Also, if you don't have it yet, the original Unbored is indispensable and tied with Wreck This Journal for the most-given-ever gift from our household. 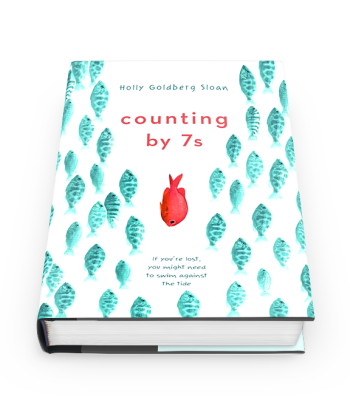 Counting by 7s by Holly Goldberg Sloan is a book Birdy loved so profoundly that a) she compared it to Harry Potter *and* Wonder, and b) she has nagged me daily to read it since she finished it. I admit that I have not read it yet, but I am going to because it looks great. Birdy: "It's about a girl who, after a really big loss, sort of puts herself back together." (Even that description kind of makes me feel like crying.) 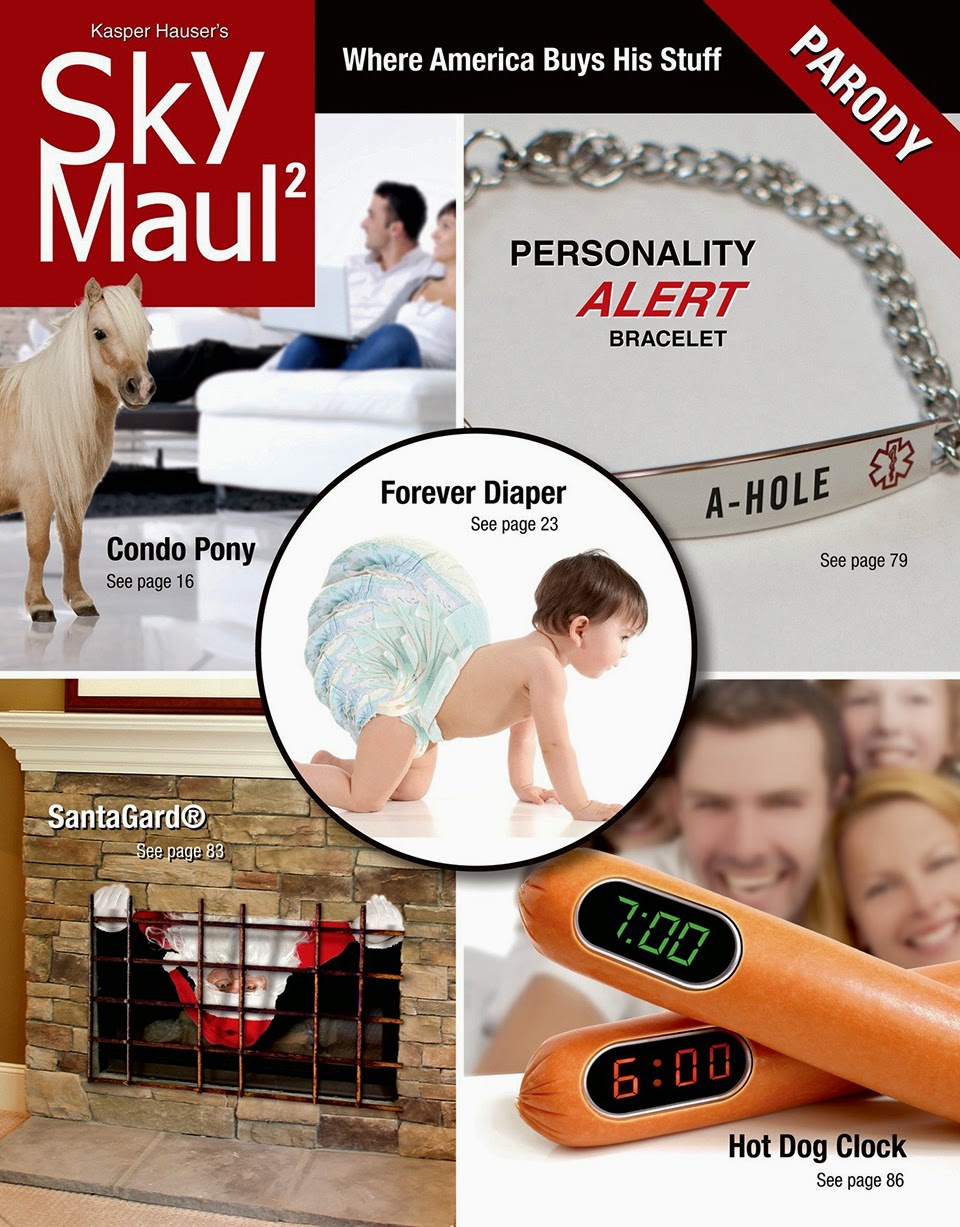 Sky Maul 2 is the only book I got Ben because I don't think he actually reads literature any more, outside of school, maybe? I'm not sure. I am trying to pick only a dozen things to nag him about at a time, and that's not on the current list. So I got him this Sky Mall parody because it's all of his favorite things: 1) funny, 2) Sky Mall, and 3) not very taxing to read. It really looks hilarious, though. 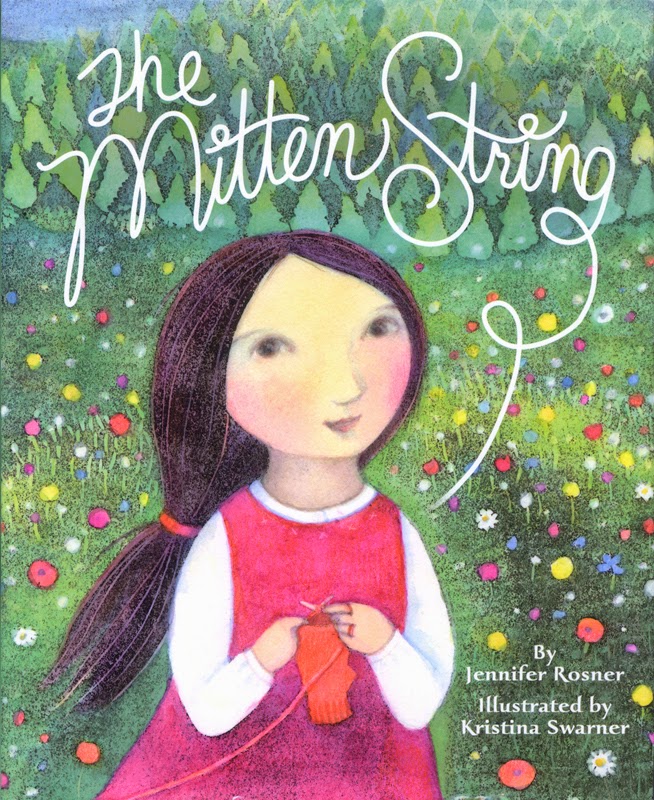 The Mitten String by Jennifer Rosner. Okay, yes, I just wrote about this and, yes, it's my friend's book. But if you are still lucky enough to be buying picture books for your kids (or any kids), this is such a beauty: a gentle, lovely story about the connection between a deaf mother and her baby, and about a little girl who kind of falls in love with them. Also, sheep, wool, knitting, Jews. Perfection. 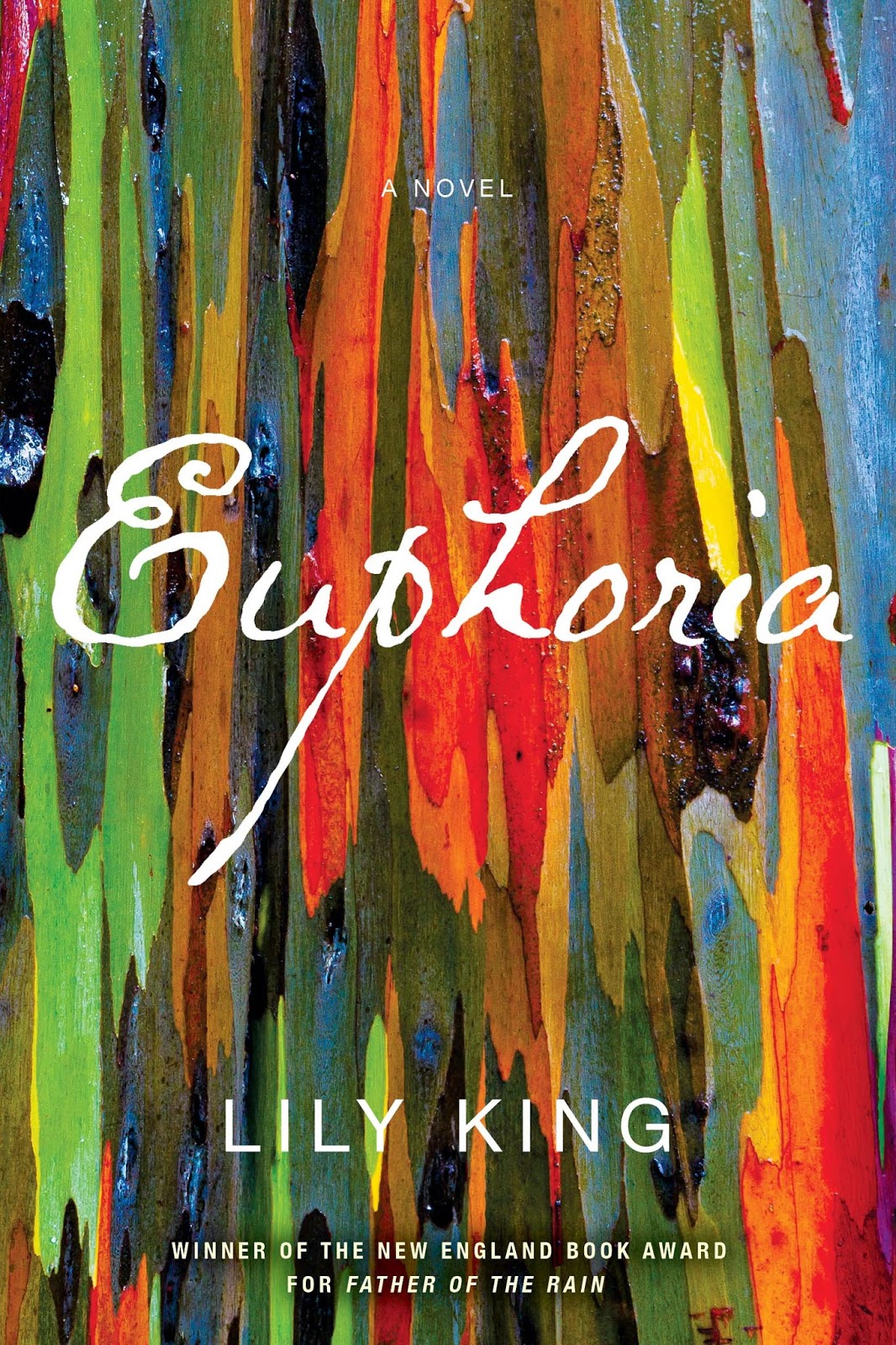 A book for the grown-ups: Euphoria by Lily King. I want to be able to tell you that Euphoria reminded me of Ann Patchett's State of Wonder, without you thinking that it's in any way really like it--only that if you have been waiting and waiting to read almost that exact same complicated, deliriously excellent book again, but afresh, this is as close as you're going to get. If I say "1930's anthropologist love triangle," or "based on the real-life journals of Margaret Mead," you're maybe not going to get as excited as you should. Give this to anyone in your life who loves to read. 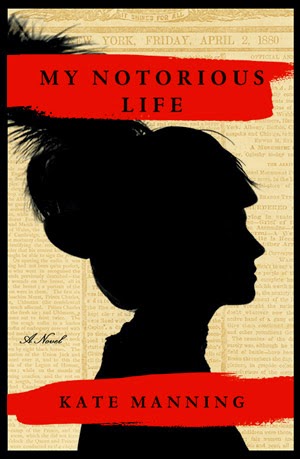 And another: My Notorious Life. I am giving this delightful novel to more than one adult-type person this year, including my own mother and Ben's friend Ava. Here's the gushing fan message I sent the author: "Oh, Kate Manning, I am reading My Notorious Life, and it so good, so deliciously perfect, that I wake myself in the night to put my headlamp on and read some more. I keep trying to imagine how you wrote it--how you got all that rich and spicy language to sound just right--but mostly I'm just glad you did." It's about a 19th-century midwife-turned-abortionist living in New York City, and it's like a Dickens novel crossed with a Planned Parenthood historical timeline. But better. Also, she wrote me back the nicest note (she reads with a headlamp too!).

Speaking of: My brother's family gave Birdy her own headlamp last year, and it was such a great present that we've since given it to a number of other kids. This headlamp, to be precise.

I love this selling point: "Ambient mode: wide beam with reduced brightness, avoids blinding others in a group situation." So, nobody will be blinded in a group situation. Phew! And speaking of excellent gift ideas we've gleaned from my brother's family, this Swiss Army Knife is another gift we've taken to giving bigger kids, especially if they're campers. 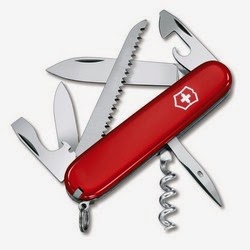 It has a saw, which my kids really require, but which is not the greatest for little kids. Although if you give this knife to a little kid, I suppose they'll already have cut their fingers off anyways by the time they'd be getting around to using the saw. This knife, paired with this little book about whittling, would be the nicest present ever. 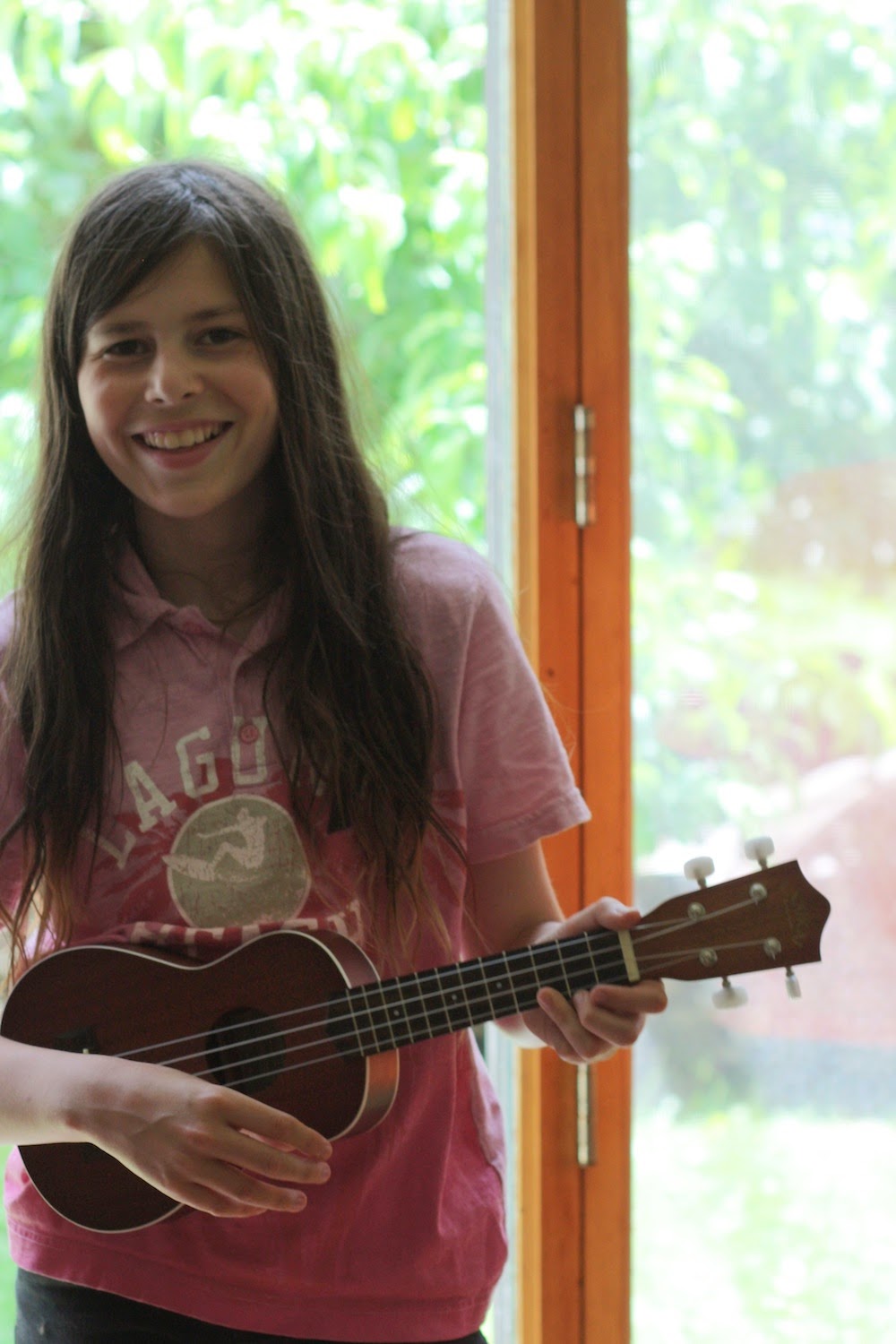 I cannot recommend passionately enough that you have a ukelele in your home (or in your car on a long trip), and giving one to a kid for the holidays might be the best way to get it there. We took a book out of the library about learning to play, but this kit has everything you need to start (including the instrument itself) and is reasonably priced.

Poo-Dough poop mold. Oh man, what can I say? My kids are going to get a kick out of something like this for about one more second, and then it's going to be all laundry money and calendars for the rest of their lives. I couldn't resist. Stocking stuffer. It's just what it looks like.