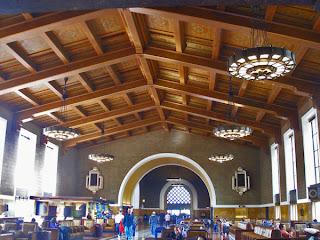 “The Last of the Great Railway Stations” was built in 1939, just in time to witness the demise of the train and the rise in popularity of air travel.

I first experienced the wonder of Union Station in the 1960s. As a child I wasn’t much interested in architecture or history—I was merely happy to be back in Los Angeles after spending a miserably cold winter in London. All I remember is walking out into the courtyard to be greeted by those oh-so-wonderful southern California palm trees.

As the decades rolled by I had the opportunity to visit Union Station for various reasons. In the seventies the place was a ghost town. I walked through the vacant spaces listening to my footsteps echoing in the emptiness. Hearing another human voice was startling.

In the eighties things took a slight turn for the better. I rode the train for the journey, not the destination, and apparently other travelers were doing the same thing. Union Station once more had the stirrings of life.

By the nineties Catellus had bought the property and was busy restoring the long-neglected buildings to their original glory. As the station had little use for many years, not much had been remodeled or destroyed. Today, all spruced up, visitors see the buildings pretty much as they were in the 1940s. The architecture incorporates many influences including Spanish Revival, Mission style, Art Deco, Streamline Moderne, Moorish—I like to call it Southern California eclectic!

The best part is that currently, with its role as the transportation hub of the area with the MetroLink and Red Line trains, MTA buses, and Amtrak all converging on the station, it is once again host to the hustle and bustle of humanity.

For sixteen years during the 1990s and into the new century I volunteered as an architectural docent with the Los Angeles Conservancy. One of my favorite tours was of Union Station, both the old station and the new transit center which opened in the early nineties. To me, the whole area is an art museum.

As an admitted decorative tile addict, I salivate over the Gladding, McBean & Co. tiles in the public areas such as the ticketing hall, entry area, and waiting rooms. I am also a marble lover so I am equally enamored of the gorgeous marble and travertine used all over the station. The painted ceilings are fabulous as well.

The Los Angeles Conservancy has two informative brochures on Union Station. These are supposedly written for children but I think they are equally useful for adults, as we are all kids at heart anyway.

If you live in LA or have the opportunity to visit, don’t miss out on discovering the Los Angeles Union Station.