Mosaics At Colchester, The Oldest City In Britain 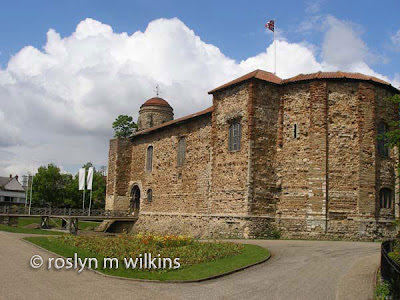 Colchester is the oldest city in Britain and for a time was the capital of Roman Britain. As you may know, the Romans conquered Britain in AD 43. Even before the Romans, it was a major Celtic center. After the Boudica rebellion in AD 61 and the destruction of the town, the capital moved to London.

In May I visited there because of the Roman mosaics on display, but the Colchester Castle Museum is housed in the largest keep built by the Normans in Europe, measuring 46 x 33.5m (151 x 110ft). Construction of the castle began in 1076. In case you’re keeping count, that’s 800 years older than the oldest existing building in Los Angeles! 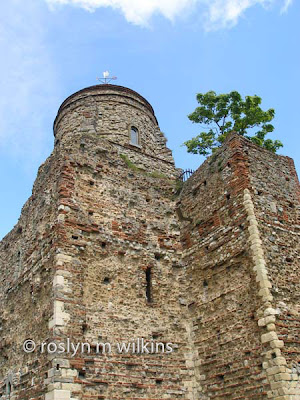 As you can see from the photos, the weather was beautiful that day. It rained on and off while I was there but I guess I was lucky as the month before and the month after were the wettest on record. 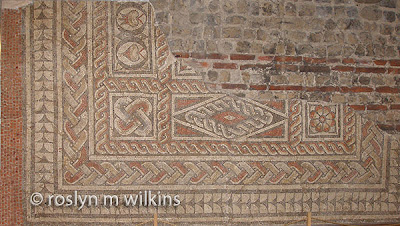 The mosaic above was discovered in 1922 by Mr. Frost when he was digging in his kitchen garden. The floor was 4.6m (15 ft) and was laid in a reception room of a luxurious house around 120AD. Similar designs have been found around Colchester suggesting there was a mosaic workshop in the town. 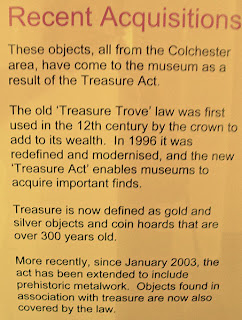 A pretty good law in my opinion. 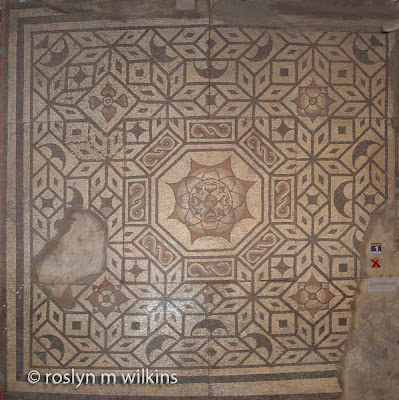 The design of this mosaic is made up of box shapes, decorated with lozenge swastikas, guilloche knots and L-shaped guilloche border panels. The central square holds a large, stylized flower with heart-shaped petals and leafy tendrils. Late 2nd Century AD. 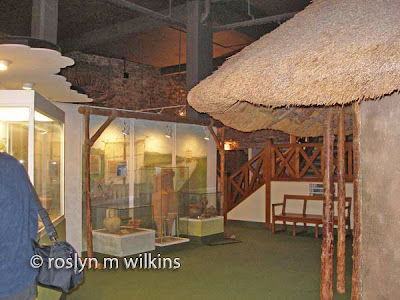 I liked the vignettes set up to show life at different periods in Colchester. This was very early England. 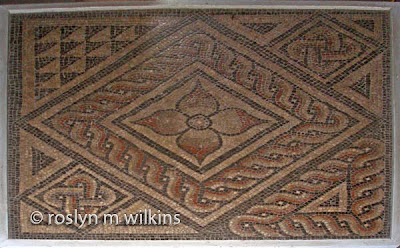 Part of the corner of a large panel. Excavated in 1865. 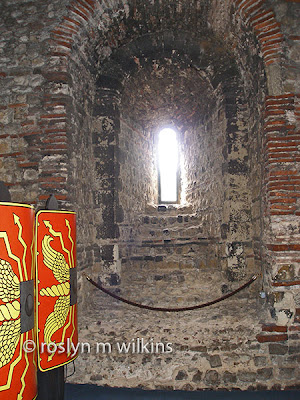 Light shineth through an open window. You can see how thick the walls are. 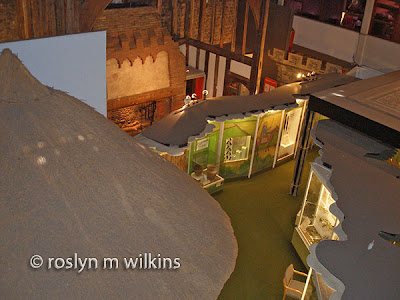 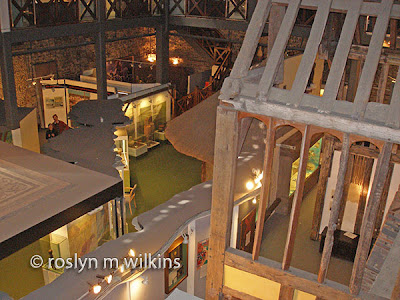 More views of the museum. 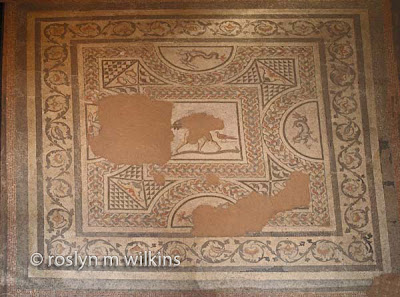 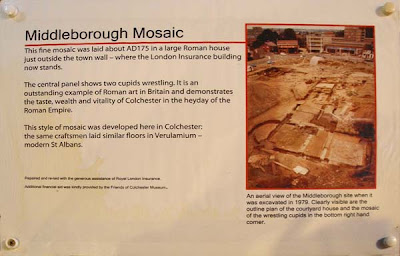 You'll need to click on the text photo to in order to read it. 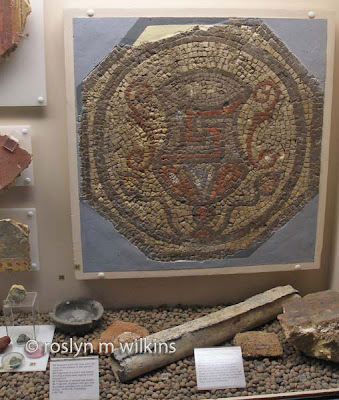 A fine small mosaic and some artifacts. 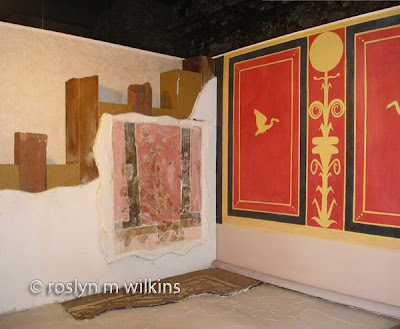 A room in a Roman house showing the structure of the wall, an original mural and a reconstruction. Part of a mosaic in the corner. The Romans loved to decorate. 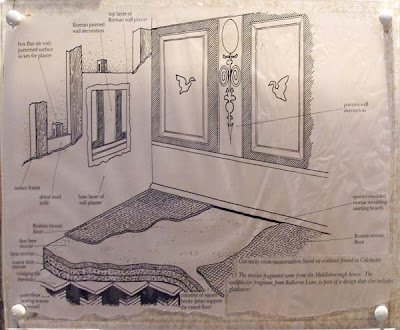 Click on this drawing so you can see the text explaining the different parts of the room structure. 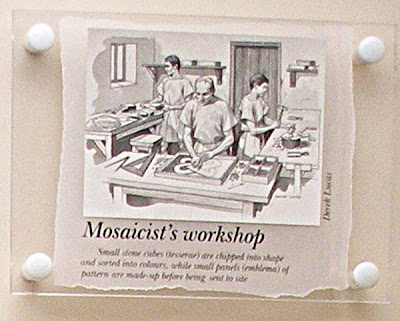 Mosaicist's workshop like one probably located in the local area. Small stone cubes (tesserae) are chipped into shape and sorted by color. Small panels (emblema) with patterns are created before being sent to the site. 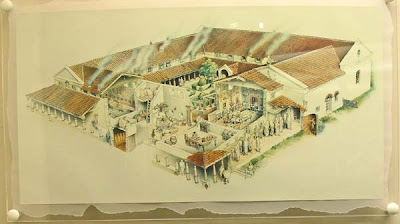 Artist's reconstruction of a large, luxurious Roman house excavated in Colchester. Built 2nd C AD and demolished about 300AD. Nothing changes! Excavations revealed a central courtyard with a surrounding wooden drain to carry away rainwater. A kitchen with at least 11 ovens and an internal water source. A semi-sunken stone cellar. A large living room with mosaic floor. A hypocaust (underfloor heating). And a basement with a mosaic that was possibly an underground shrine. 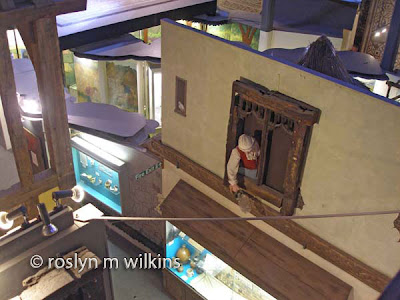 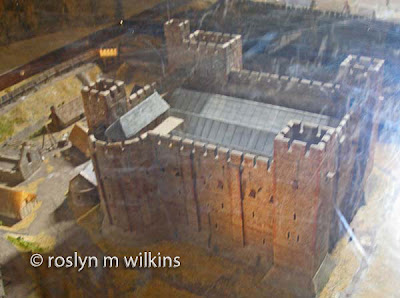 Model of the castle under a scratched up glass case.

A composite photo showing the fireplace, mantle and roof of a house in Medieval England.
My visit to Colchester castle ended in a torrential downpour as we headed to the carpark. I told my friend to run ahead as my knee was having a conniption that day. By the time I arrived at the carpark the rain was coming down so hard I could not find his car. So I wandered around literally soaked down to my underwear.
My friend had made it back to the car but because of the rain he couldn't see me either! After a few minutes the rain let up enough for him to pop his head out of the door and then I saw him and the car. Oh well, what would a trip to England be without buckets of rain?
And I had enjoyed myself taking the time machine back to Roman England.