It seems that every day there is another Superintendent or Principal stealing money, lying about something, harming kids, etc. The list is long.

In my opinion the real story is that the New York City Department of Education does not have the institutionalized strategies to deal with wrong-doing by anyone in their employ. I dont think anything will change in the occurrences of misconduct until the structure of the workplace is reformed "according to a new social and legal contract, one that encourages cooperation, justice, and a heightened and broadened sense of community". (p. 10, Mobbing by Maureen Duffy and Len Sperry). 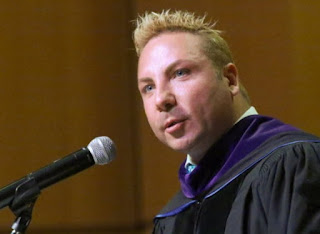 A Staten Island high school principal paid $10,000 to the city amid accusations he misused his position to
benefit his domestic partner. (Advance file photo)City principals caught behaving badly
By Carl Campanile, NY POST, February 7, 2018
Three city principals were caught treating schools like their personal fiefdoms — with one scoring a plum gig for his lover, another using pre-K as her grand-son’s babysitter and a third treating an underling as a chauffeur, according to the Conflict-of-Interest Board.College of Staten Island HS for International Studies principal Joseph Canale was fined $10,000 for having his domestic partner become a social work intern at his school in 2016.Canale then lied to College of Staten Island officials that the two didn’t meet until after his partner got the gig.In a settlement with the ethics board, Canale, employed by the city Department of Education since 2001, admitted that he had a staffer directly supervise his partner and then attempted to convince the college to extend the internship.Canale pulled out all the stops to keep his lover in the school.After he “falsely claimed” to have her first met his partner during the internship, he told college officials that failing to extend it would “negatively impact my school,” according to settlement documents.When that failed, Canale attempted to convince CSI officials to allow his partner to continue the internship at Tottenville High School, also on Staten Island.That pitch also was rejected.A miffed Canale then sent angry emails to CSI officials in May and June of 2016 complaining about the denial and threatened to discourage his graduate students from enrolling at the college.“I said I was `not comfortable’ recommending the CSI Social Work Program to graduating student given CSI’s treatment of my domestic partner,” Canale said in his settlement statement.As part of the settlement, Canale agreed to pay the $10,000 fine after admitting to misusing his position to benefit his partner.In the second case, PS 38 Principal Yolanda Ramirez admitted to bringing her 3-year-old grandson to her school during the 2015-2016 school year and had him participate in a Pre-K classes ten times.Ramirez’s grandson was not officially enrolled in, or old enough for the class.Making matters worse, the pre-K class she illegally placed her grandson in was already at maximum limit of 18, the COIB settlement said.Ramirez admitted she violated the City Charter by using her office to benefit her daughter.Under the settlement, Ramirez agreed to pay a $3,000 fine.Ramirez has been in hot water before. She was investigated after being accused of berating teachers for giving her poor grades on a school survey.The board also issued a warning letter to Dewey HS Principal Connie Hamilton, who misused her position by being regularly driven to and from work by a subordinate from March 2016 to April 2017.During that time, Hamilton, who had medical issues, did not reimburse the staffer for the expenses.The COIB choose to issue a warning instead of a fine because the staffer volunteered to drive the principal and lived near her home.Hamilton also reimbursed the staffer when informed of her transgression.The conflict-of-interest law bars any financial relationship between a boss and subordinate — and any car-pooling arrangement must be approved by COIB.

Updated 1:54 PM; Posted 1:49 PMBy Kyle LawsonSTATEN ISLAND, N.Y. -- A high school principal on Staten Island recently paid the city thousands in fines amid accusations he demanded his live-in partner be given an internship. Joseph Canale, the principal at College of Staten Island High School for International Studies, violated conflict of interest laws over a span of about a year in the interest of his live-in partner, according to a statement Wednesday from a spokesman for the city's Conflict Of Interest Board (COIB).In 2015, Canale approved an internship for his partner at CSI High School, authorities said.At the time, his partner was pursuing a master's degree at the College of Staten Island, which collaborates with the high school in programs offered to students, the spokesman said.The internship was overseen by Canale's subordinate and indirectly by himself, which represented the first in a series of violations, according to a joint disposition with the city's Department of Education and COIB.At the end of the internship, Canale allegedly attempted to convince CSI to extend his partner's internship at the high school beyond its normal termination date. When that didn't happen, he demanded the college place his partner at a different DOE school, insinuating "in a manner the college viewed as a threat," he would no longer recommend the college to his high school students, the COIB release said.In lieu of judicial or administrative action, Canale agreed to pay the COIB $5,000 on or before Nov. 30, 2017; followed by a second payment of $5,000 due on or before Dec. 31, according to the disposition.Canale could not be reached for comment Thursday. A spokesman for COIB said the following in regard to investigations of DOE employees misusing their positions: "We take conflicts of interest seriously and ensure accountability. We have strict protocols in place for reporting and investigating violations."Staten Island school principal hit with $10G fine for trying to get his lover paid internshipNY Daily News, Ben Chapman, February 7, 2018
The City Conflicts of Interest Board slapped a Staten Island principal with a $10,000 fine for trying to get his live-in lover a paid internship, settlement documents published Wednesday show.

He remains on the job.

Other documents released Wednesday show the conflicts board also hit Brooklyn Public School 38 Principal Yolanda Ramirez with a $3,000 fine for illegally putting her grandson in pre-kindergarten classes at the school.

Ramirez also remains on the job.