Post 200 makes for quite a milestone.
I've recently amalgamated my pot numbering for the smaller and larger pots as the interface between them was becoming fuzzy. The big pot I've just made, below becomes Pot No 204.
200 pots and 200 posts, a double milestone.

I've been working on making a kiln load of small to medium pots for the market day in May. Many of these are now close to dry. And then along came an order for about 14 pots, many of them quite large and one in particular was needed sooner rather than later. So I jumped straight onto it and hope that I can accelerate the drying to something less than three weeks. 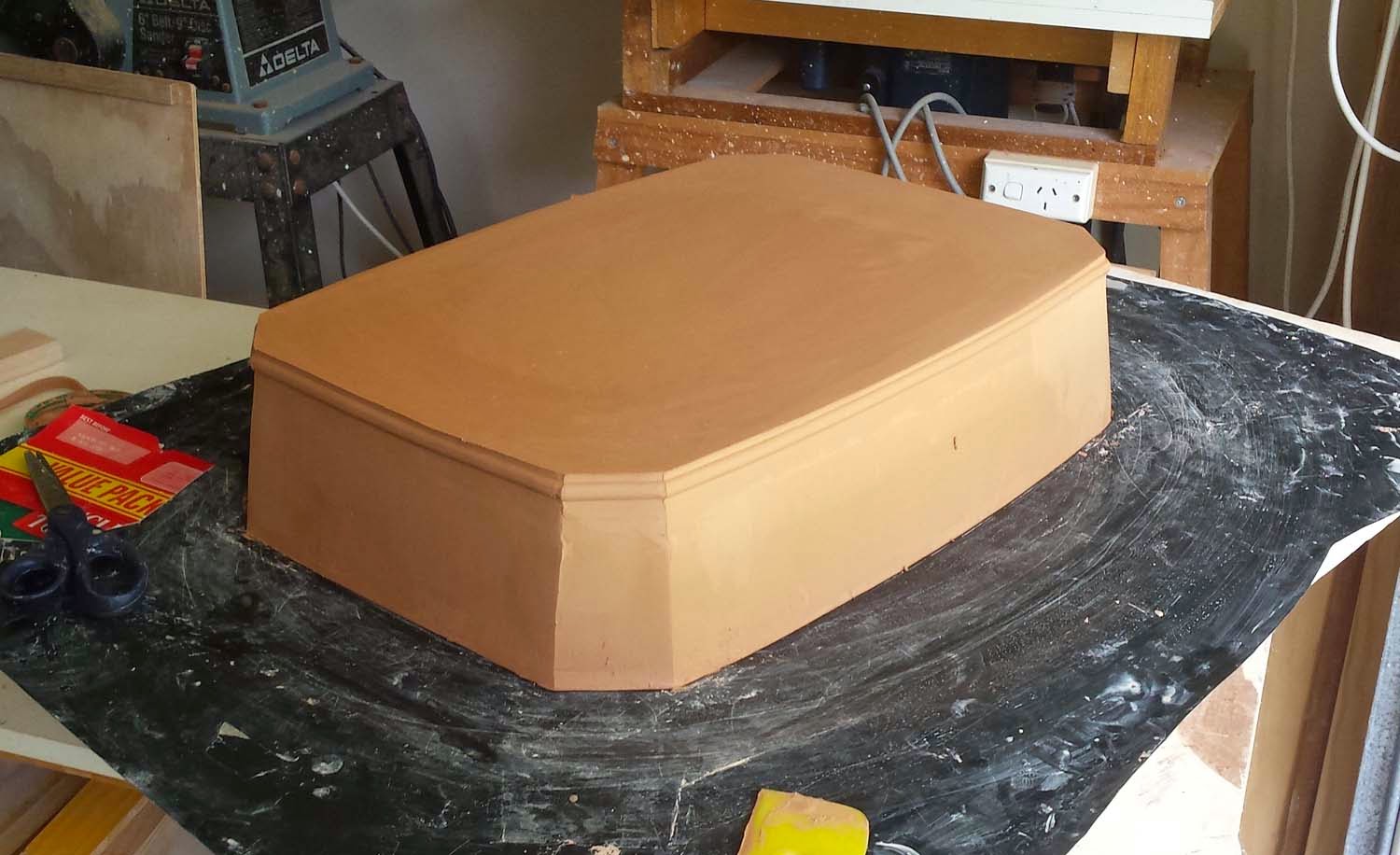 This is work in progress. The pot is a bowed wall rectangular pot with truncated corners, a big square flange rim and a lower rib. Straight walls can be a challenge and the only answer is to slab build with a heavy wall ( this one is 11mm) with the clay quite hard leather hard and manage the movement of the material so there are no bend memory records made for the clay to revert to in firing. Much more care and attention is needed to the joints the dryer the build clay. 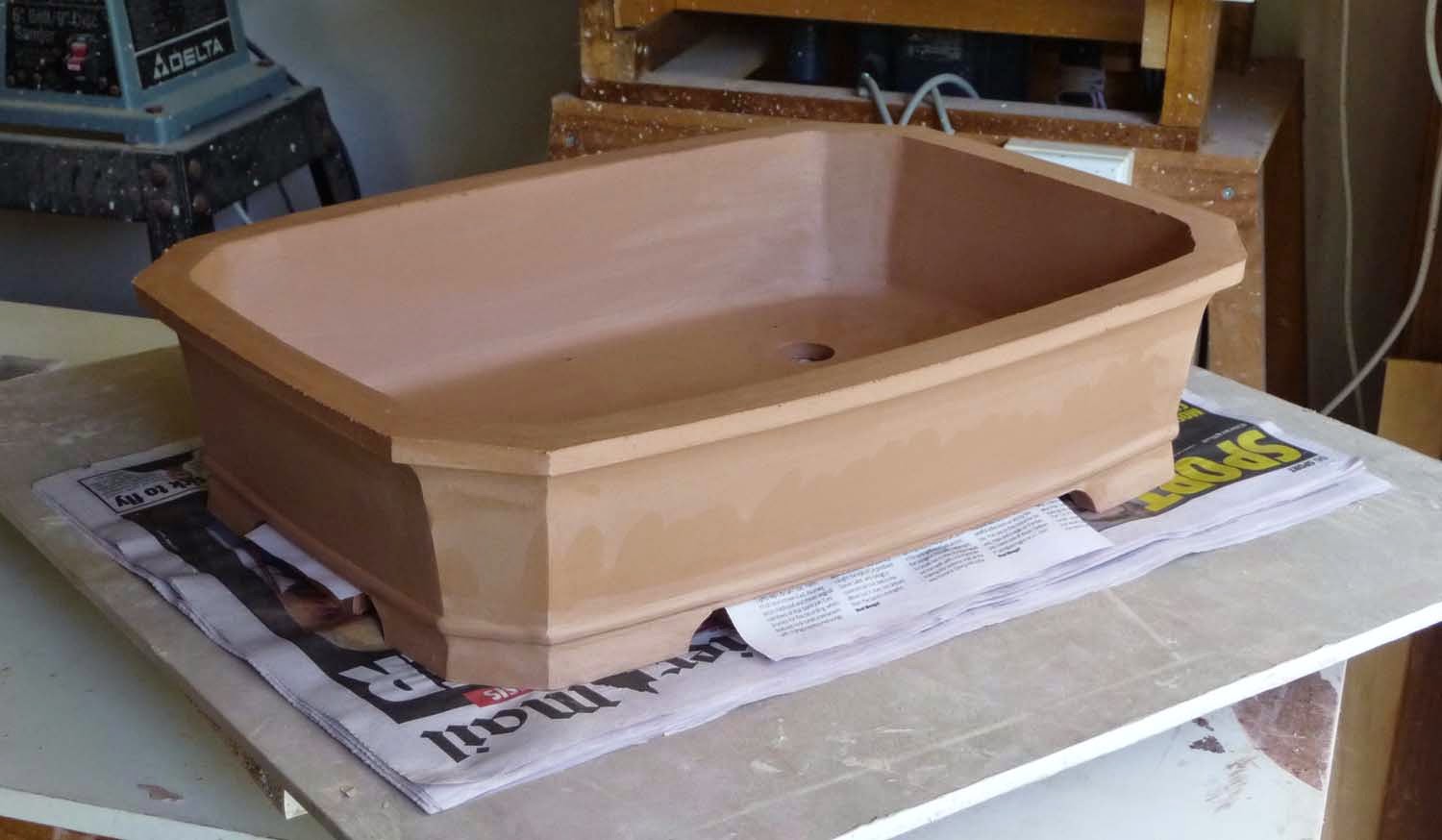 After a few hours of work here is the finished pot. The final target length is about 450mm so at this point it is closer to 510mm. With all that clay it's pretty hefty to flip. 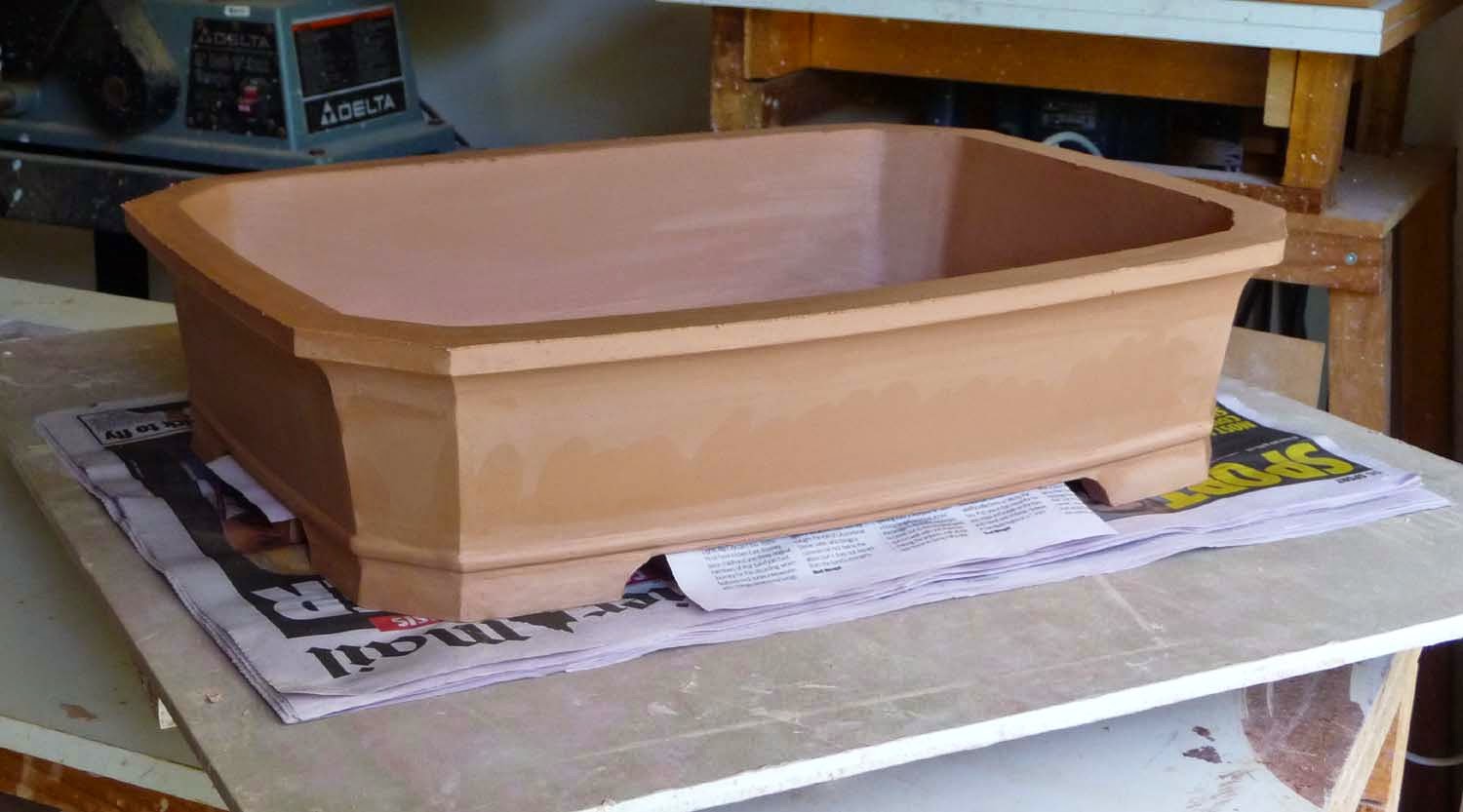 In these shots you can detect the bow in the walls. Its pretty small but I think makes for an attractive design, and is becoming something of a signature. Since first experimenting with bowed walls this is getting close to an answer that I'm going to be replicating. The depth of the rim and feet, combined with the flat walls and sharp edges makes for a pot that's fairly assertive in its presence, but a good looker all the same. 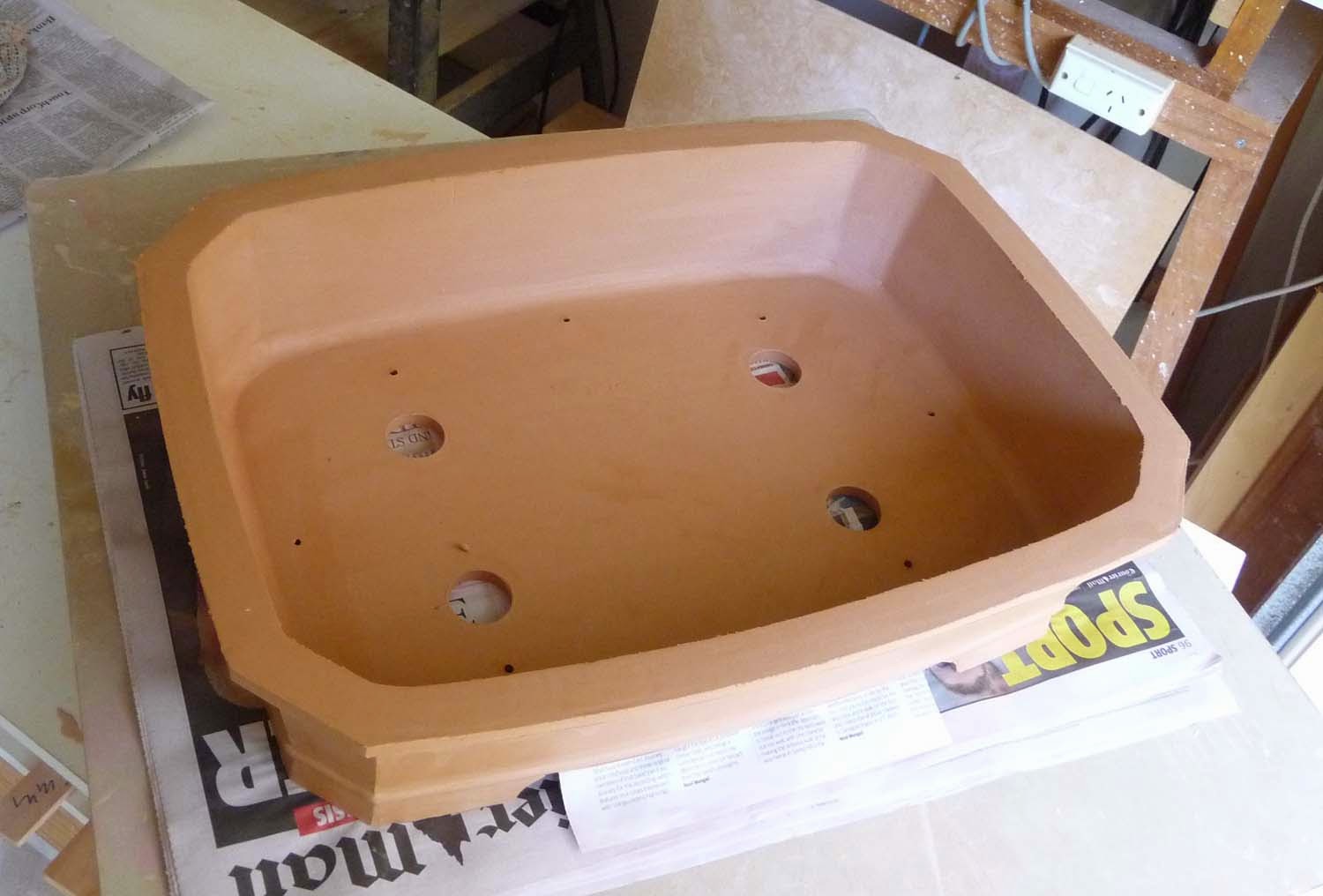 The other challenge with a build like this one is the need to prepare a number for slabs of different thickness. I have found that even with a well made slab roller the roller cylinders, which are tubes, will deform while rolling and the clay at the edge of the slabs will be thinner than at the center. I might yet dissassemble it and fill the rollers with concrete. But for now the best answer comes from rolling the clay when it is softer than you might want for immediate use. The result of that strategy is sheets of clay lying around the garage drying for a couple of days before they are ready to use. For a big pot like this that means one for the floor, two for the walls, one for the feet and base props, and one more for the rim, 5 in all. 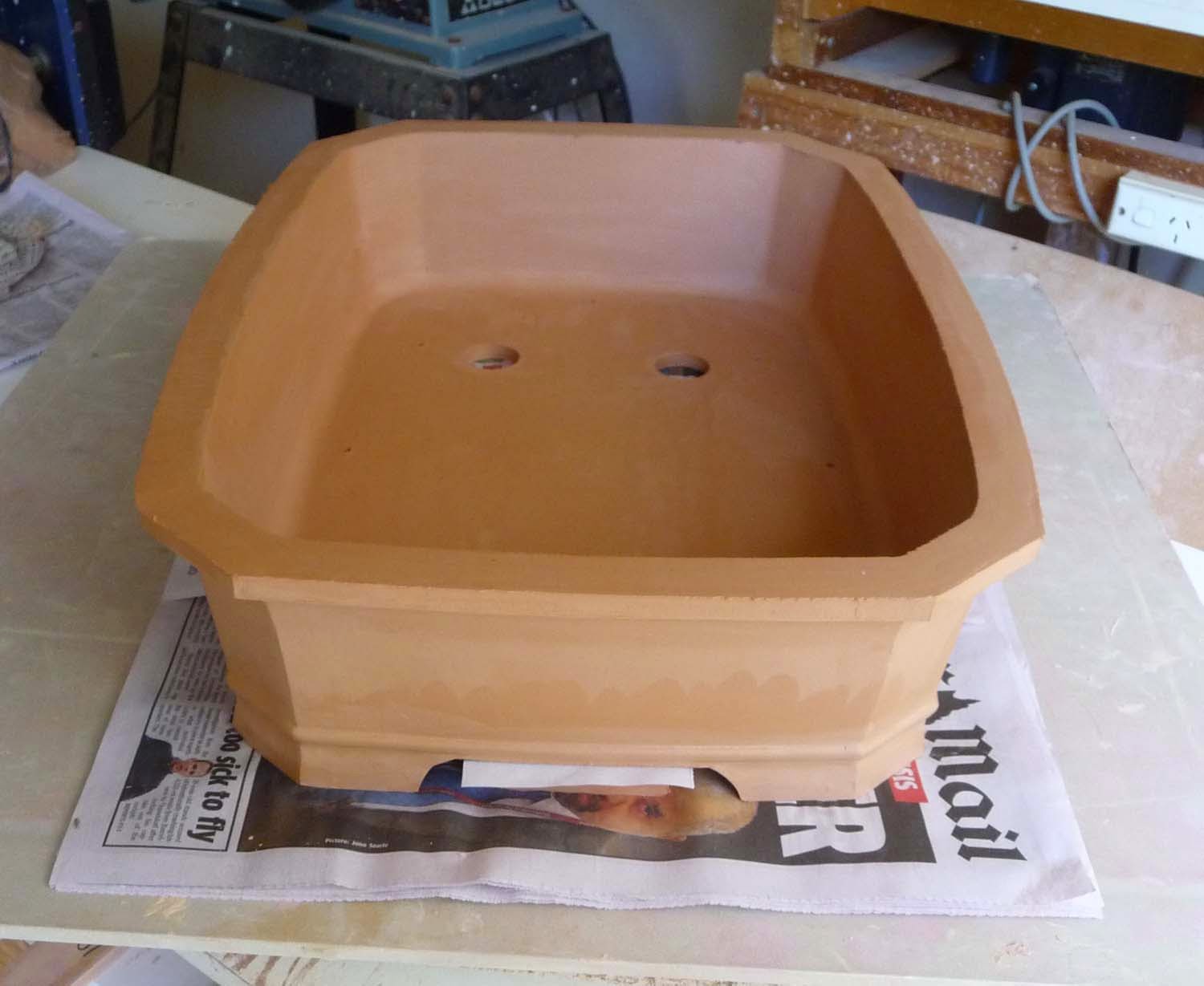 Two more shots to show the wall configuration. I've probably said it before but commissions are good to push you to do something that you might not otherwise do or to try a different technique. My normal practice has been to form the fillet between walls and base during the build, but on this one I chose to leave that until last. With leather hard walls and base a bead of malleable clay can be shaped into the fillet with a finger run without any concern for deforming the wall profile and produces a much nicer internal finish. There is something satisfying about persevering to produce an internal surface that you'd be happy to have on display. The result in making this pot will encourage me to follow the same practice more often, or at least perhaps once I see how it performs going through the firing pipeline.

This is a low flat walled oval about 400 long with a thin rectangular rim flange.

This is another very similar but this time with a 'riveted' rim. I've been wanting to make one of these for quite a while and will be interested to see how it feel on completion. I made a shohin of similar design too and perhaps it is better at that scale.

And this last one is just a few of the shohin pots - of about 10 that I've made recently. These are bone dry and ready to bisque but will now slot in around the big commission job.