The Economy Of Serenity - Friday Flash 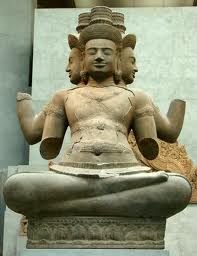 The Victorian explorer drove into the heart of the jungle, his heart ignited by tales of hidden cities and vast troves of gold. Trussed up tightly in his safari suit and pith helmet, the only decorative adornment was the curlicue of the ends of his moustache. The only life more choked off than he, were those trees suffocated by the vines that enchained them.
The canopy's tendrils were thick and plenteous. They conspired to even banish the light. With their machetes the expedition toiled endlessly to cleave a path. Until they finally cut through to the great temple that had been reclaimed by the jungle, once its human inhabitants had mysteriously melted away. The sheer scale of the edifice fair took the man's breath away and he could only twizzle his moustache by way of appreciation.
This being an era of incipient photography, his box cameras could barely frame any of the grandeur within their pinholes. Even the sketch artist found his hand reeling at the immensity of the task and failed to render a fifth of its full splendour. How was the adventurer to transmit the evidence of his discovery? How was his name to be spread around the world? For the only gold to be had here was in relaying its wonders to his countrymen. The party started taking their machetes to the stonework and slicing off the friezes to transport back to the museums of their Imperial capital far to the West.
*
The statues and friezes had a room dedicated to themselves within the museum of Oriental art. The lights were turned down lower in this gallery than in any other throughout the exhibition. The gazes of the Buddhas criss-crossed the room, illuminating the gloom with their strange glow of serenity. Nothing else existed in that room, other than their inscrutably smiling visages. Visitors found utter peace in the dark room. They could stay there contemplating for hours, without feeling the need to slit their wrists or dive into the abysses of Mark Rothko's meditative canvases as offered by other temples of entrancement.
People were so transported by their experience in the gallery, that they often became pilgrims to the temple itself, deep in the heart of the cleared jungle. Though dwarfed by the immensity of the temple complex, they didn't quite achieve the same sense of ease and contentment. Many put it down to the stonework being out in the full light under the sky, in contrast with the everlasting restful crepuscule back in the museum. It still didn't prevent their hankering for a stone Buddha of their own and a thriving market in stolen friezes and statues soon developed in order to meet the insatiable demand.
Over time so many friezes had been removed from the temple's walls and porticos, that the temple became a shell of itself already a shell. The visitors dropped off as word of its disappointments trailed back. Meanwhile the Oriental museum had been a victim of its own timeless success and its constraints by being a building constructed in the previous century and in need of modernising. The permanent exhibition was moved to a bright, spanking new purpose built design and for some reasons the Buddhas were ensconced in a light, airy room in order to dispense their luminous smiles.  The enchantment of their aura was dispelled.
Accordingly they stopped inspiring people to travel to their original home. The temple was so denuded of any decoration and adornment, other than those friezes too cracked by clumsy hands to be salvageable, that tourists stopped visiting entirely. And in time the jungles once again closed back over the vacated human colony. The Cheshire Cat beams of the Buddhas cast away far from home in a forlorn vault of the museum,  may just have broadened imperceptibly. Even as the jungle twizzled its creepers and tendrils in appreciation. 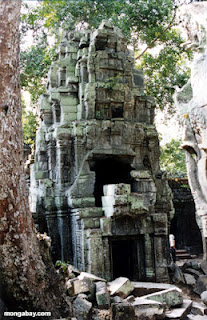 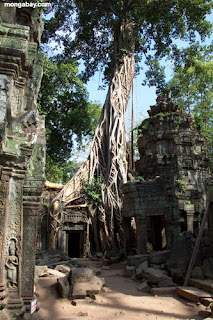 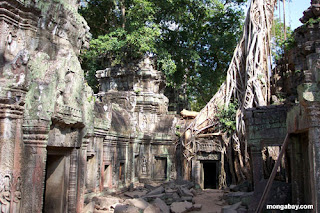 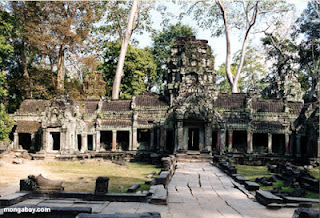