Those Olympic Posters: Some Alternatives

Earlier this month, 12 posters by leading artists for the 2012 Olympics and Paralympics were unveiled to a largely skeptical public. Given the same brief, Kingston University students have come up with their own versionsOver the current term, I have been doing some lecturing with the third year students on Kingston University's graphic design and photography courses. A couple of weeks ago, following the release of the 2012 Olympics artists posters, course director Rebecca Wright and I asked the students if they would like to respond to the same briefy given the artists. We asked them for a personal response to the idea of the London Olympics and the intersection between art and sport. Here are their responses.
Leanne Bentley and Ben West came up with this cheeky and somewhat damning response to the artists involved with the official series: DNF stands for Did Not Finish, the ultimate Olympic fail. 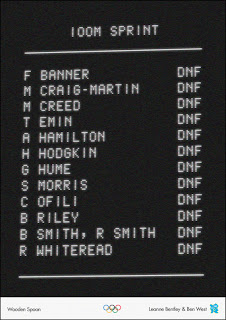 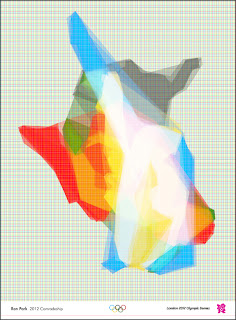 A lot of the student responses were quite critical or dubious about the supposed benefits of the Games coming to London. Here Libby Wimble compares LOCOG's ambitions to those of a Stalinist Five Year Plan: presumably she feels they have as little basis in reality as each other. The background to the poster is made up of 250,000 tiny tractors. 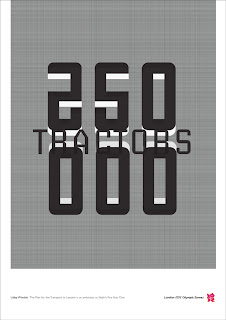 Rosie Palmer and Helen Ferguson were also dubious, focusing on the terrorism threat 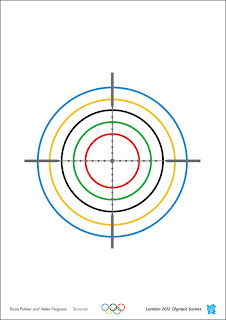 Tamara Elmallah was concerned about all the overcrowding the games will bring to the Tube, overlaying an image of spectators rendered in all the Olympic colours until it becomes a brown sludge of humanity 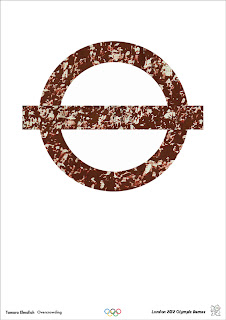 And Alice Tosey wants us all to 'mind the gap' 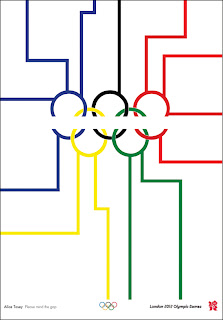 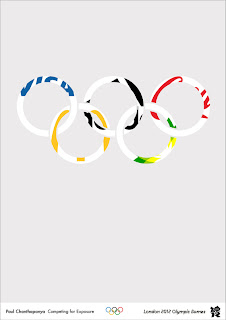 Others, though, chose a more positive view. Benji Roebuck and Clara Goodger created their poster from the word for 'hello' in the languages of competing nations, allowing the ink from one word to run into another suggesting the coming together of different nations at the Games.

Coming together is also the theme of Jo Hawkes' poster

And this cut paper piece by Fred North