Would you just look at that date? November 1st! Where did October go? And all of you in the northeast U.S. are probably wondering where fall went. Snow before Halloween. Amazing.

Thank heaven we don't have snow, but it hasn't stopped raining here in South Florida for days. And I mean a near-constant deluge. It's all remnants of Hurricane Rina. Well, weather like this has made me do some organizing around the house and some cookbook and magazine reading; and it's gotten me thinking about the (coming sooner than we think) holidays.

I was glancing through Fine Cooking Magazine and came across an intriguing sweet potato recipe. Every Thanksgiving, I invariably serve them in some form or another, sometimes savory, sometimes sweet, sometimes an old fashioned southern sweet potato pie. (I remember my mother used to make those mashed sweet potatoes with orange juice and topped with marshmallows back in the 50's. Anybody else remember that?)

So I decided on a test run, which I do when company's coming. Not so much when it's family. They're forgiving. :)  It was fabulous! Creamy sweet potatoes with sour cream, divine browned leeks and sweet sausage. And because I had some left over, I refrigerated them without the Gruyère and the next night, grated some on top and reheated them in a hot oven. Tasted great, so you could make these ahead....a real plus for a holiday dish. 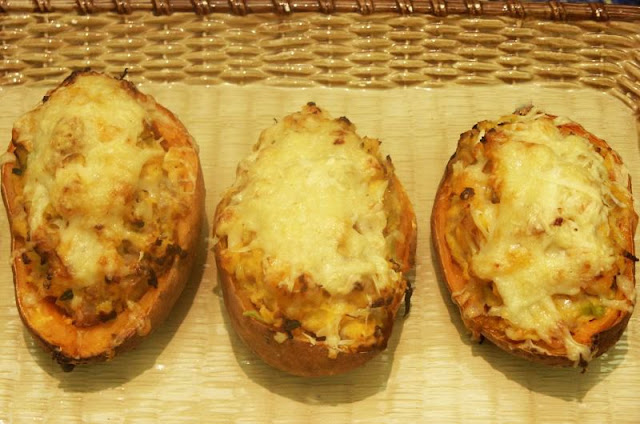 Method:
Position a rack in the center of the oven and heat the oven to 375°F. Line a heavy-duty rimmed baking sheet with parchment or foil.
Poke the sweet potatoes a few times with the tip of a knife and arrange them on the baking sheet. Bake until completely tender when pierced in the fattest part with a skewer, 35 to 60 minutes.
Meanwhile, heat the oil in a 10-inch skillet over medium-high heat. Add the sausage, reduce the heat to medium, and cook, breaking it into small bits with the edge of a slotted spoon, until no longer pink, 5 to 6 minutes. Transfer to a plate and set aside.
Pour off all but 1 Tbs. of the fat and add the butter. When it melts, add the leeks, sage, thyme, and 1-1/2 tsp. salt. Cook, stirring stirring, until the mixture just starts to sizzle. Reduce the heat to low and cook, stirring frequently, until the leeks are very soft and starting to turn golden, 10 to 15 minutes.
When the sweet potatoes are cool enough to handle, carefully cut them in half lengthwise and gently scoop the flesh into a medium bowl, leaving about 1/8 inch of flesh in the shells. Mash the scooped flesh with a fork or potato masher until smooth. Stir in the sour cream and 1 tsp. salt. Fold the sausage and leeks into the mashed sweet potato and season to taste with salt.
Position a rack 6 inches from the broiler element and heat the broiler on high. Mound the filling into the potato skins and top with the cheese. Put the potatoes in a 9x13-inch baking dish and broil until the cheese is golden, about 4 minutes. Serve immediately.